Crane and heavy haulage specialists Eisele AG Crane & Engineering Group from Maintal near Frankfurt and Riga Mainz erected three Liebherr 8-axle mobile cranes for the refurbishment of two historic railway bridges at a crossing used by Deutsche Bundesbahn in Darmstadt. After hoisting out the listed steel structures, they were positioned on a nearby asphalt surface. The bridges are currently being refurbished in that location. Massive mobile cranes are scheduled to return in autumn this year to hoist the two bridges back into the original positions. 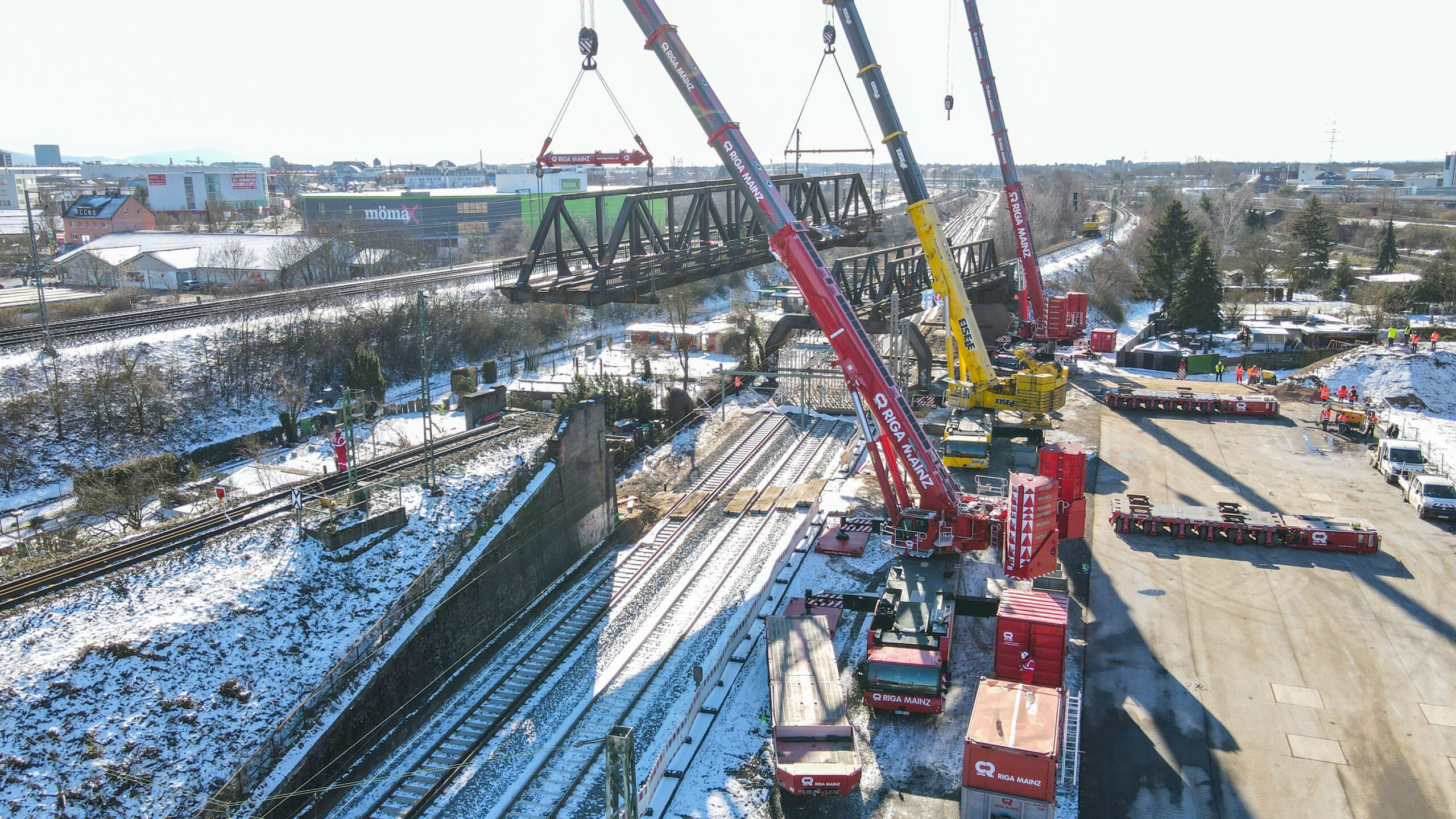 The order for the refurbishment of the bridge structures was awarded to construction contractor Adolf Lupp, which asked Eisele to complete the crane work. In turn, Eisele brought Riga Mainz on board as a partner to assist it with this order. The bridge structure, which consists of two separate steel bridges, routes a single track over a double track section operated by Deutsche Bundesbahn.

Both bridges measure 40 metres in length, 13.65 metres in width and 5.3 metres in height and weigh in at 160 tonnes. For the refurbishment work, the two steel structures had to be positioned on 1.5 metre high concrete elements positioned on a nearby asphalt surface. As the mobile cranes were unable to access this area, the bridges were hoisted out and then loaded onto SPMTs. The 6-axle heavy duty modules then transported the massive components to the intended position with the unloading operation being carried out by the SPMTs’ hydraulic systems. 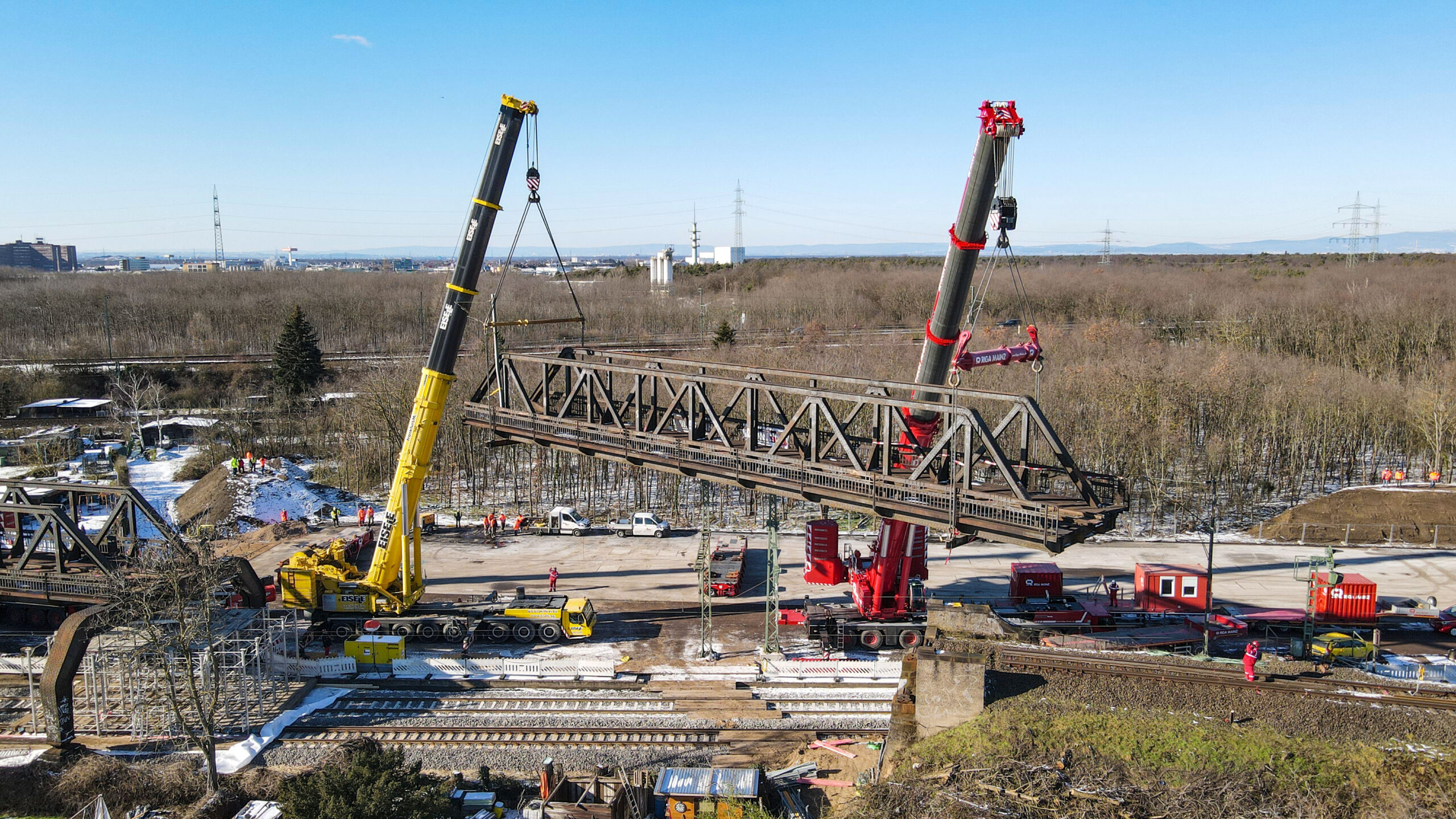 The position of the first bridge and the fact that it had to be hoisted over a 12.9 metre overhead cable mast made the job a major challenge. Therefore, the first hoist was carried out by Riga’s brand new LTM 1650-8.1 working with Eisele’s LTM 1500-8.1. Both cranes were ballasted with 165 tonnes of counterweights. The LTM 1650-8.1, with its telescopic boom extended to a length of 33.8 metres, hoisted a weight of 88.2 tonnes at a radius of 19.1 metres. The remaining 85 tonnes were hoisted by the LTM 1500-8.1 using its 31.7 metre telescopic boom at a radius of 16.4 metres. 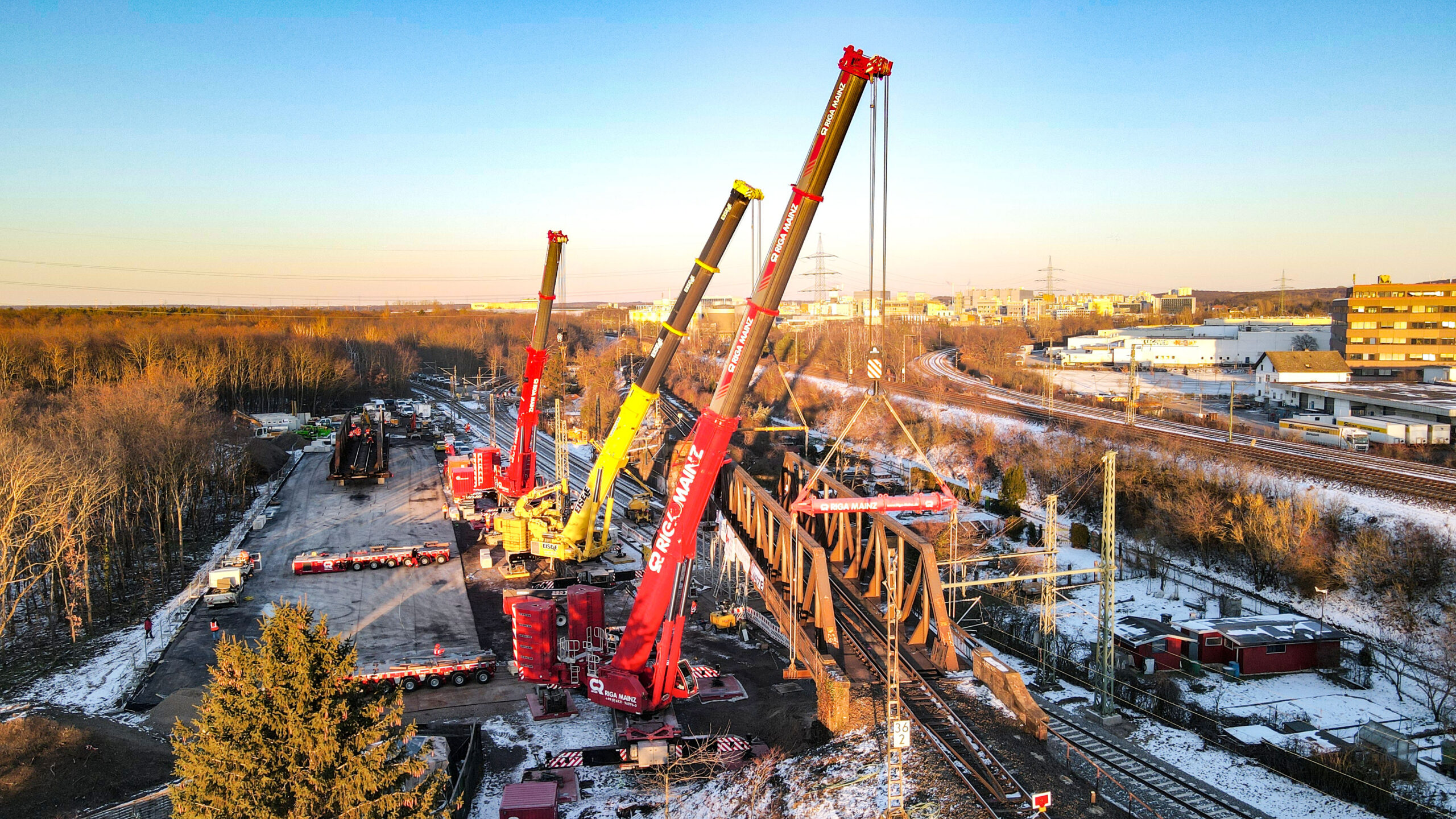 Whilst hoisting out the second steel bridge, Eisele’s LTM 1500-8.1, which was standing in the middle, worked with an LTM 1450-8.1 from Riga Mainz, fitted with 134 tonnes of ballast. The 450 tonne crane had to manage a load of 85 tonnes on its 31.9 metre telescopic boom at a radius of 15.5 metres. The third crane was required as it was not possible to move the cranes around the site between hoists due to a lack of time.

Uwe Langer, Managing Director at Riga Mainz, took responsibility for planning the crane hoists and was on site in person as the bridges were hoisted out.

He says: “The new LTM 1650-8.1 really impressed me. As it hoisted the heavy bridge, the crane performed as if it had nothing on its hook. The boom and the chassis are a masterpiece of design. It’s fantastic – a spectacular machine in this crane class! The LTM 1650-8.1 will impress the whole crane world – I am convinced of that”.

bauma TALK: Challenges and new Prospects for the Future of Mining

Zero Emissions and Electric Solutions at the Core of Bauma 2022