How to Carry a Rocket : The Logistic Challenge of NASA’s SLS. Ep#1

Our staff was invited by the KSC (Kennedy Space Center) to cover the maneuvers steps of the SLS from assembling to the launch.

Earth’s Most Powerful Rocket Arrived at NASA’s Kennedy Space Center: A Focus on How This Outstanding Shipment Process Was Brought to Life.

Artemis I will be the first integrated test of NASA’s deep space exploration systems: the Orion spacecraft, Space Launch System (SLS) rocket and the ground systems at Kennedy Space Center in Cape Canaveral, Florida. The first in a series of increasingly complex missions, Artemis I will be an uncrewed flight test that will pave the way for a new lunar exploration program.

The mission will be a stepping stone for human deep space exploration, leading the agency’s efforts under the Artemis program for a sustainable presence on the Moon and preparing for human missions to Mars.

SLS is an advanced, super heavy-lift launch vehicle that will provide an entirely new capability for science and human exploration beyond Earth’s orbit.
With unmatched payload mass and volume capability, SLS is the only rocket that can send the Orion spacecraft, astronauts, and a large cargo to the Moon on a single mission. This reduces the number and complexity of in-space operations and increases the chances of mission success.

It serves as the backbone of the rocket, supporting the weight of the payload, upper stage, and crew vehicle, as well as the thrust of its four RS-25 engines and two five-segment solid rocket boosters attached to the engine and intertank sections.

It is the same diameter as the space shuttle external tank and is covered with an orange spray-on foam to insulate the cryogenic propellants. The stage is made up of 10 major barrel sections, four dome sections and seven rings. Each cylindrical barrel section consists of eight aluminum panels that vary in length and height. Those components are welded or bolted to form five major components: the liquid hydrogen and liquid oxygen tanks, engine section, intertank and forward skirt. Those five major components are joined to form the completed core stage.

Towering 212 feet with a diameter of 27.6 feet, it will store cryogenic liquid hydrogen and liquid oxygen and all the systems that will feed the stage’s four RS-25 engines. It also houses the vehicle’s avionics to control the rocket’s flight, including flight computers, cameras, batteries, power and data handling, sensors and other electronics.
It is designed to operate for approximately 500 seconds, reaching nearly Mach 23 and more than 530,000 feet in altitude before it separates from the upper stage and Orion spacecraft.

On April 25, The SLS Program delivered the core stage rocket, aboard the agency’s Pegasus barge, to NASA’s John F. Kennedy Space Center, after completing a successful series of Green Run tests at Stennis Space Center in Mississippi.
Teams aboard the barge, which was modified to support SLS’s weight and length, safely piloted the specialized self-sustaining vessel to the spaceport till the arrival, on April 27, after a 900-mile journey.

Then, the massive SLS was offloaded and moved into the iconic Kennedy’s Vehicle Assembly Building for integration with the twin solid rocket boosters, Orion spacecraft, and additional flight hardware.

In preparation for shipping the flight core stage to Stennis for testing and then to NASA’s Kennedy Space Center for launch, NASA developed a core stage “pathfinder” the same size, shape and weight as the real core stage that is used to test transportation and moving equipment and handling operations.

These tests provided solutions for traversing the levee at Michoud, installation and securing in the Pegasus barge, as well as the precise setup for the lifting hardware tools at Stennis and Kennedy. All these tests and solutions were crucial in the development of the detailed handling procedures for the core stage that will help launch the Space Launch System rocket on the Artemis I mission to the Moon.

Crews at NASA’s Stennis Space Center near Bay St. Louis, Mississippi, worked April 19-20 to remove the first flight core stage of the agency’s Space Launch System rocket from the B-2 Test Stand in preparation for its transport to Kennedy Space Center in Florida.

Operations required crews to lift the core stage from its vertical placement in the stand and lower it to a horizontal position on the B-2 Test Stand tarmac. Then, the stage has been loaded on NASA’s Pegasus barge for transport to Kennedy, where it has been prepared for the launch of the Artemis I mission.

NASA has for decades used barges to move its large spaceflight structures: Pegasus was specially designed and built in 1999 to transport the giant external tanks of the space shuttles from the Louisiana shore to NASA’s Kennedy Space Center on the eastern coast of Florida.
Pegasus replaced Poseidon and Orion, barges that were used to carry Saturn rocket stages and hardware for the Apollo Program, and completed its final space shuttle-related voyage in 2011.

Pegasus had to be modified and refurbished to carry SLS for its new mission ‘cause SLS core stage is the longest item ever shipped by a NASA barged: more than 50 feet longer than the space shuttle external tank and, including ground support and transportation equipment, and more than 600,000 pounds heavier.

Even the Ground Support Equipment and Transporters were specifically designed and developed to move the Space Launch System rocket’s core stage flight article. As Arlan Cochran pointed out “these systems made it possible to have the precision required to transport the size and mass of the Artemis I core stage. This transportation system with the core stage loaded onto it is approximately 215 feet long, 38 feet tall, and weighing just under ¾ of a million pounds.

“The only necessary change was adding a support tug leaving Stennis due to the rise in the river level from the heavy rains the area received earlier in the week. Outside a small weather front that came through one morning, the weather was exceptional in the Ocean for the journey to Kennedy Space Center”, Arlan Cochran – Pegasus barge captain – added.

The transportation system controls the speed and movement of the core stage transport, which allows it to safely enter and exit the Pegasus barge. Due to the weight of the Core Stage along with the Ground Support Equipment, an active ballast was required during movement onto and off Pegasus to ensure the dock area remains safe.”

“Detailed handling procedures capture complicated transportation processes in which multiple disciplines are engaged in a common goal. It’s a coordinated dance that requires everyone to know not only their part, but also the steps of their partner as well. Each discipline within the move team is responsible for vetting the information contained in that procedure.

This system ensured that the most accurate information pertaining to the equipment, tools, and hardware was made available to the personnel who were responsible for the safe movement of the core stage flight article to be used on the Artemis I mission to the Moon.”

Moreover, during this trip, the Pegasus barge moved forward from inland to open-ocean waterways. Arlan Cochran detailed that inland waterways were well above normal levels, and an additional tug was added to the escort in the event support was needed maneuvering through the bends and the bridges in the waterway.

In the open ocean, they constantly monitor the speed compared to the wave heights and direction in order to minimize the amount of force being imparted into the cargo bay.

Thermal protection was a critical point to be aware of, according to Michael Alldredge, responsible for the Thermal Propulsion Systems.

Thoughtful planning and checking were performed before operations took place close to the core stage. Multiple spotters were used during moves to alert the team of potential impact points. Protecting the Space Launch System rocket’s core stage at every stage of processing, operations and transportation on the ground is critical to the overall success of the Artemis I deep space mission.”

Monitoring of the pressure inside the two tanks core stage propellant is fundamental in order to transport cryogenic liquid hydrogen and liquid oxygen tanks, and it has to be achieved throughout the transportation period. Therefore, each tank is pressurized before transportation to keep moisture out of the tanks along with keeping the propellant feedline system components in the proper positions during transport.

The massive SLS moved off the barge into the iconic Vehicle Assembly Building for integration with the twin solid rocket boosters, Orion spacecraft, and additional flight hardware.
It has been transported on a self-propelled module transporter on April 29, 2021. 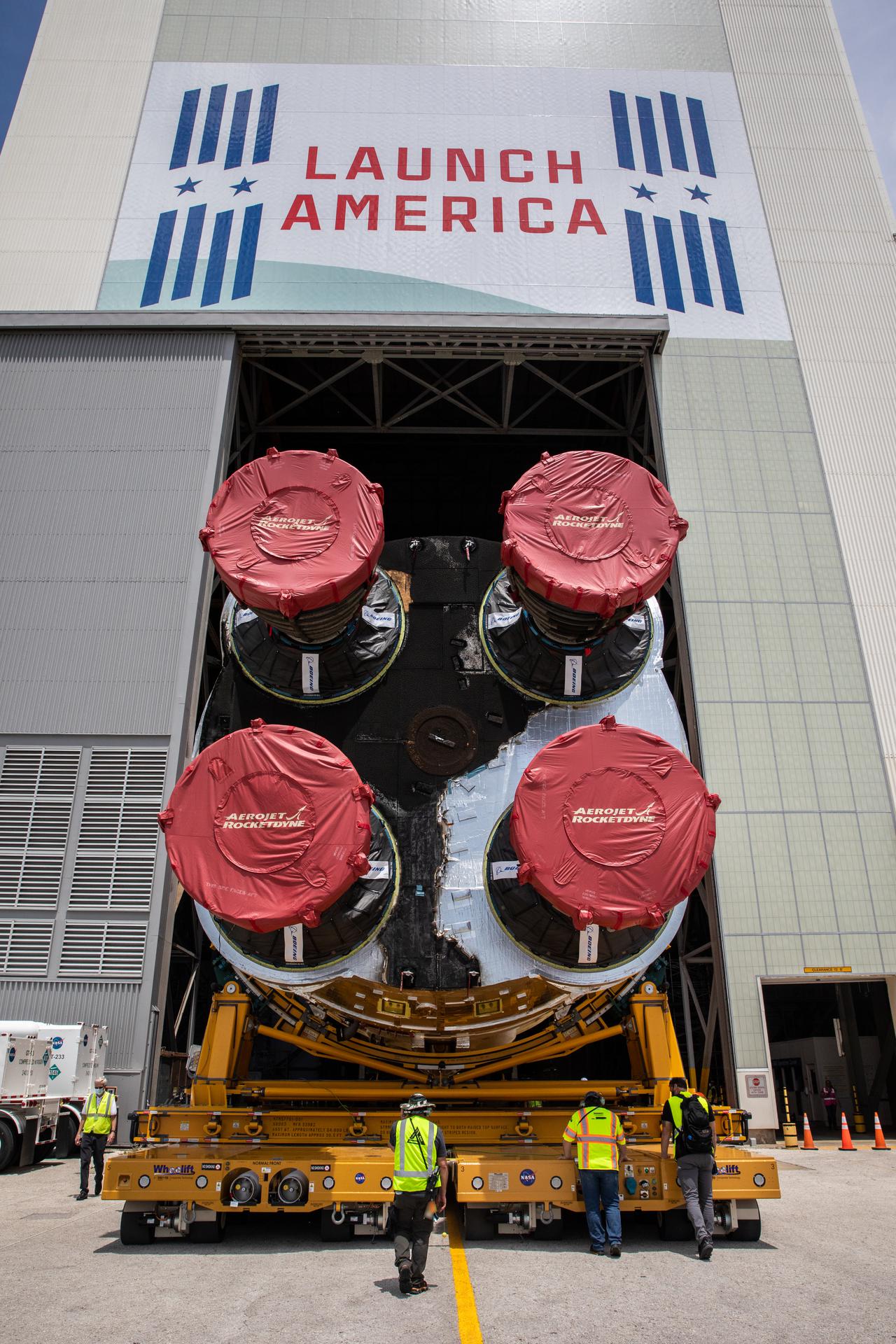