Bau-Union ensures efficient raw material extraction and reloading with the latest generation of construction machinery Zimmern Ob Rottweil. Companies have to keep an eye on the diesel consumption of the tracked excavators and wheel loaders they use so that costs do not get out of hand and CO2 emissions are kept within limits. 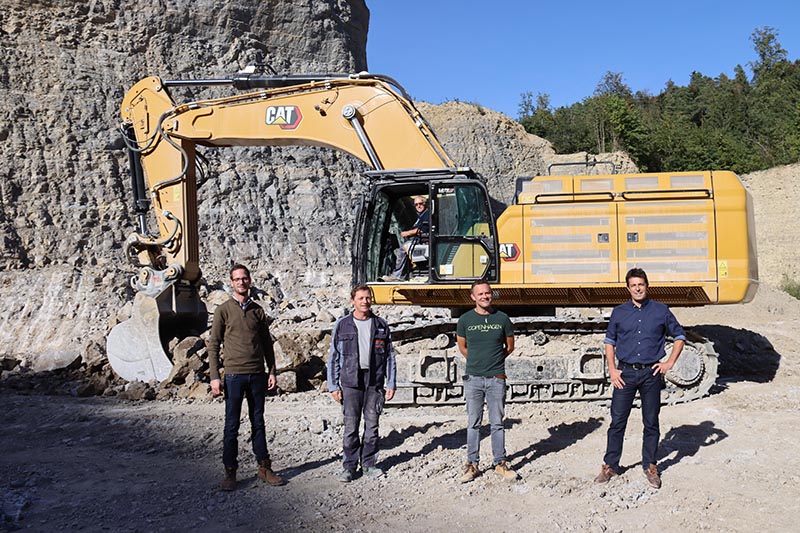 In order to be as efficient as possible in this respect, Bau-Union has opted for Cat construction machines, which have served as key machines in raw material extraction and reloading at the six sites in Baden-Württemberg for many years. A Cat 374 crawler excavator and Cat 980 XE wheel loader of the new generation have now joined the machinery fleet – with this, the group of companies and its shareholders such as Uhl, Gebr. Stumpp Balingen and Gebr. Stumpp Rottweil are following the chosen path to extract and load shell limestone productively but also sustainably.
While many companies rely on the method of large borehole blasting in order to subsequently load the loosened rock, Bau-Union and its associated ballast works at the Dauchingen site rely on a different mining method. The new Cat 374 works its way down from the top with a bucket and then with a seven-tonne hammer. The reason why blasting is ruled out is because of a nearby drinking water source – blasting vapours would leave traces in the groundwater.

“We have already tried ripping at another site. But there the geology was permeated by inclusions of clay and thus more favourable. In Dauchingen we can only get a few metres with it – the material is too hard for that. So we ended up with the hammer,”

“Chiseling is the main part of the work. We make fast progress with it,”

First the track excavator works on the overburden with a 4.5 cubic metre backhoe, then the twelve metre thick dolomite rock and the subsequent up to 45 metre thick shell limestone are chiselled and thus loosened from the bond. Sole by sole, it goes forward in this way.

The shell limestone is then again loaded with the bucket onto a screening machine, which then takes over the first separation. Then the material is picked up by a wheel loader for further processing.

A quick coupler from OilQuick supports the change of attachments. A reinforced short boom and reinforced stick in the ME variant were selected as equipment designed for tough applications with high material stress. Even though the Cat 374 embodies a new generation of machines and as such has assistance systems such as the Cat Payload weighing system, the driver Gerhard Münch, who has been working at the site since 1986, comments: 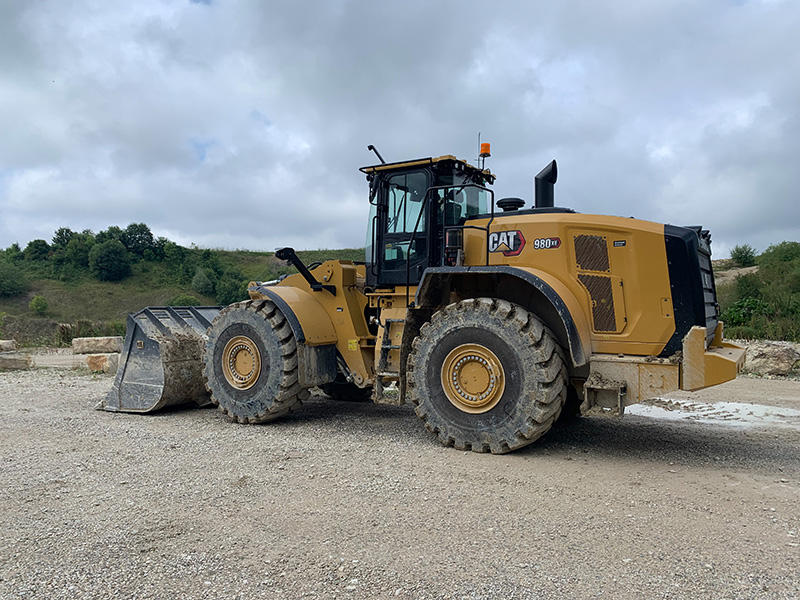 At the Willmandingen plant, on the other hand, a new-generation Cat 980 XE wheel loader has moved in to handle Jurassic lime. The site joined the group in 2020. Since last year, Schotterwerke Heinz has been part of the group of companies and has been operating under the name Bau-Union GmbH & Co Schotterwerke Heinz KG. The abrasive properties are also noticeable in Willmandingen, which led to a six-cubic-metre bucket with underscrew blade in combination with the Cat Advansys tooth system. On the new Cat 980 XE, the two letters embody high-tech. They stand for a continuously variable, power-split transmission.

“For us, the technology combined with the fuel consumption led to the decision to use the wheel loader to feed the mobile and stationary screening plant and the crusher, because there are many differences in height as well as steep passages to overcome,”

Together with his colleagues, he has calculated just under 16 litres – but the consumption has not yet materialised.

“Chiseling is the main part of the work. We make fast progress with it,”

Just as assistance systems are typical for the 374 crawler excavator, the central element here is Cat Payload, which enables precise weighing of the bucket contents so that the driver fills the bucket optimally with every lift.

In future, Bau-Union wants to set up and make greater use of the connection to the Vision Link fleet management system – after all, Stephan Braun wants to keep an eye on all six locations and use it to query information such as the operating hours, idle times and fuel consumption of the machines.

“This will help us to find out where there is still a need for optimisation and where we can improve further,” 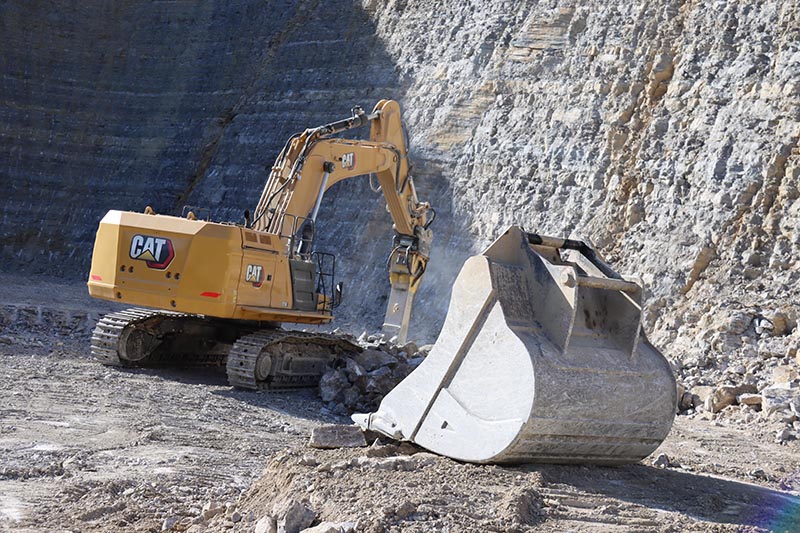 The workshop foreman also repeatedly uses the digital tools that Zeppelin has developed for customers like Bau-Union. For example, spare parts in the form of maintenance kits are ordered via the customer portal. In the event of repairs or with regard to the technical equipment of the Cat construction machines, the employees receive support from sales representative Andreas Theurer and service consultant Simon Honer from the Zeppelin branch in Böblingen, who advise Bau-Union:

“We carried out a profitability analysis for the two new purchases and looked at the total operating costs that will be incurred over the next five years. Criteria such as fuel consumption and diesel prices, but also maintenance costs play a major role,”

Such economic feasibility studies are not only carried out for the Dauchingen and Willmandingen sites, but also for the other plants in Zimmern-Horgen, Oberndorf-Bochingen and Irslingen, which produce shell limestone for civil engineering, road and path construction. In addition, there are plants in Trossingen and Neufra that distribute aggregates such as gravel, sand and chippings for concrete production.