Norderney is one of the most popular islands on the German North Sea coast with tourists. To keep it that way, it is necessary to carry out regular maintenance measures to preserve the island’s stability in the long term. The company, Tell Bau from Norden, using a new Doosan DX255NLC excavator, has just completed a project to implement one of the measures used to protect the island. 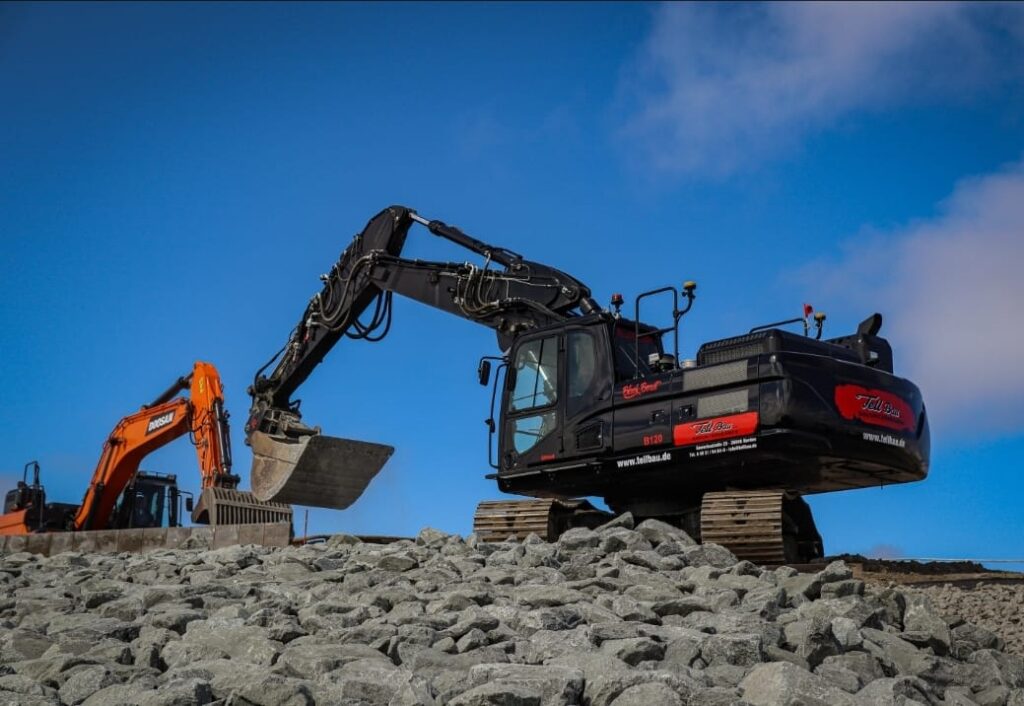 The project, which lasted about four months, was commissioned by the NLWKN (Lower Saxony Water Management, Coastal Defence, and Nature Conservation agency). It called for the reinforcement of the revetment in the east of the island. A revetment is a passive structure that protects against erosion caused by wave action, storm surge, and currents.

The project required the old revetment to be dismantled and a new revetment made of hydraulic rubble stone in full grouting to be constructed. At the same time, the asphalt revetment had to be renewed. The Doosan DX255NLC was used flexibly in various areas. Its tasks included both demolition and earthworks. The Doosan excavator was also used to drive sheet piles into the ground along the full length of the construction section using a Movax SG50V pile driver. In addition, utilizing the onboard TopCon 3D system, the excavator produced the dyke shapes required for installation and profiling of the revetment. 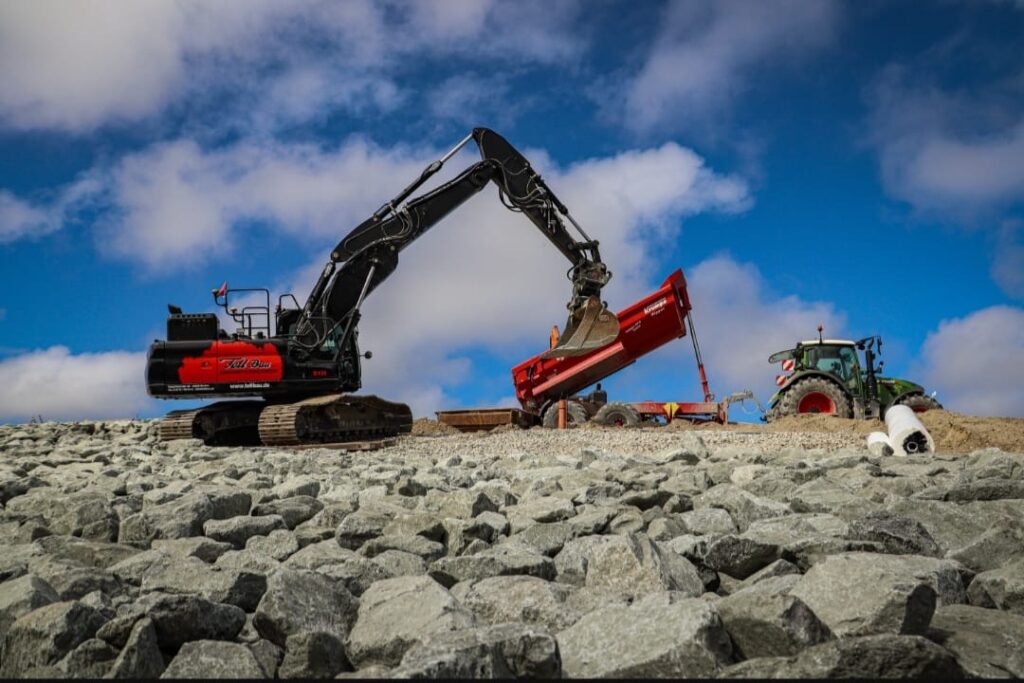 “Due to the diversity of the project, the excavator had to demonstrate a high degree of flexibility in various applications. It fully met this requirement.”

The Doosan DX255NLC has an operating weight of around 25 tonnes. It is equipped with the 192 kW six-cylinder DL06 engine from Doosan. With its maximum digging depth of 6.81 m, it can be used extremely flexibly in civil engineering work. The DX255NLC at Tell Bau is fitted with a TopCon 3D control system and can be equipped with a Movax SG50P pile driver and a PowerTilt. 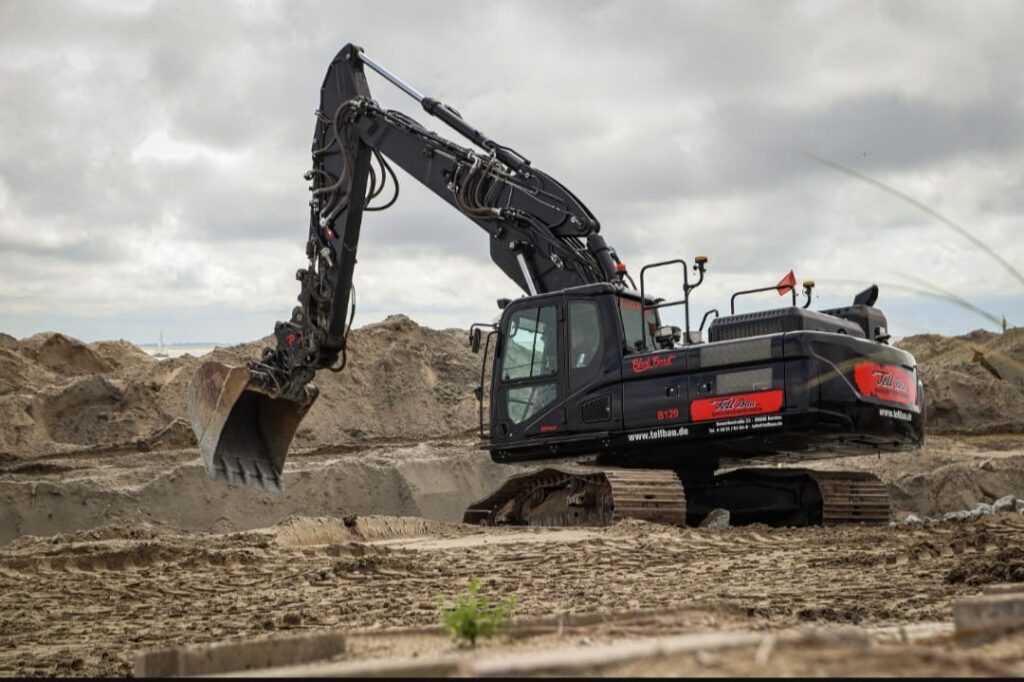 “Of course, we cannot conclusively evaluate the Doosan DX255NLC at this point, but the price-performance ratio is very good and so far the reliability is also impeccable.”

The special feature of this NLC (Narrow Long Crawler) excavator is its transport width of 3 m. This allows the excavator to be transported with a permanent excess width exemption in Germany.

Tell Bau purchased the machine from Doosan dealer, Werner Seemann, which has roots going back to 1966. Werner Seemann now has branches in East Frisia, Bremen, and Osnabrück. Since 1999, the two sons of the company founder, Werner and Jens Seemann, have also been active in the company.

Continuity and sustainable processes are central components of the company’s philosophy: “Instead of quick profits, we focus on reliability and partnership,”

says Werner Seemann Senior. In addition to the construction machinery business, the company also offers services in the areas of vehicle construction and handling technology. 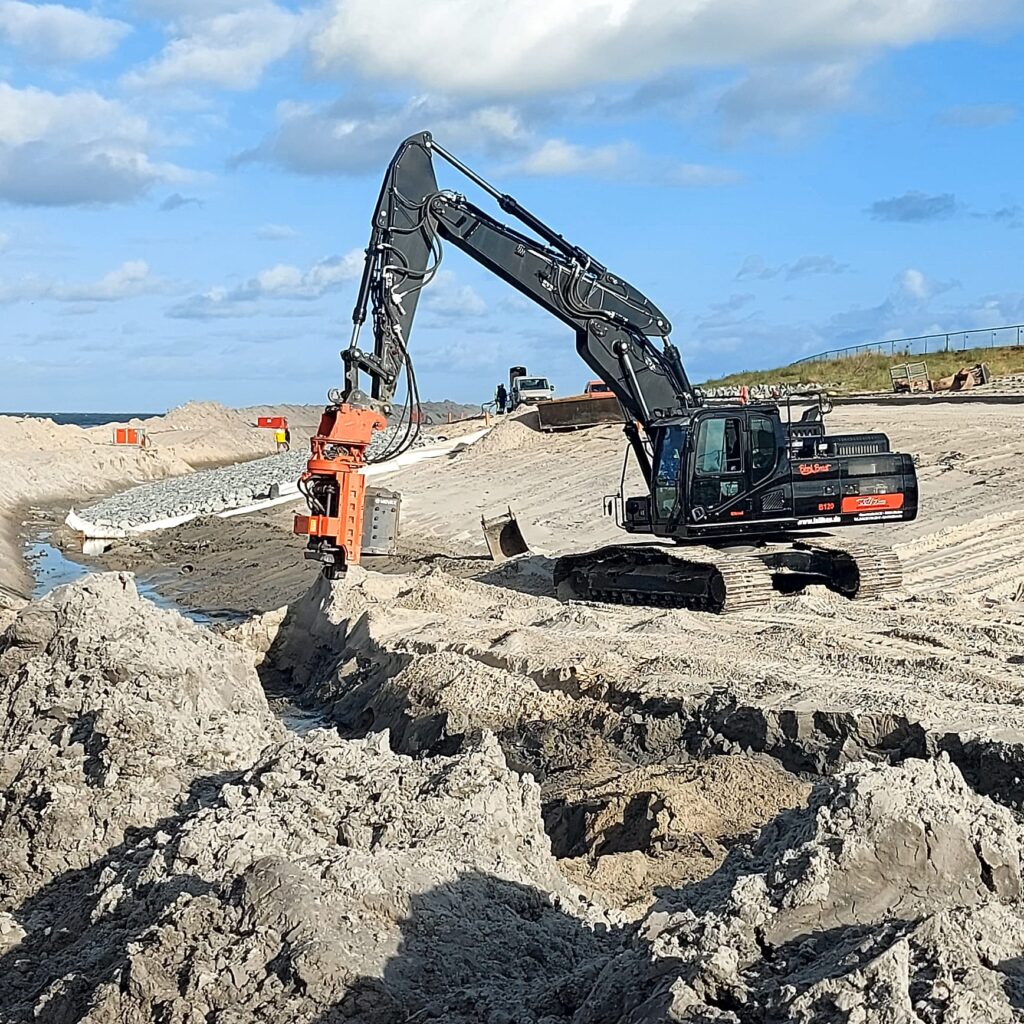 In addition to residential construction, the company undertakes projects in the fields of structural and civil engineering, sewage treatment plants, and large industrial buildings. Research centres, production, and administration buildings as well as consumer markets are constructed on a turnkey basis for well-known clients. For four decades, Tell Bau has also been building and supplying synthetic surfaces and artificial turf systems for both ball sports and light athletic use.