Doll is offering specially designed wind blade transport systems based on its proven series of trailers, suitable for all types of blades on the market. Growing numbers of renowned transport companies are being won over by the benefits of these systems, which combine mechanical or hydraulic lifting adapters with special bolsters and trailers.

Bolk Transport and Universal Transport are recent additions to the roster of companies that have opted for Dolls’s self-steering trailer combinations. Both chose hydraulic lifting adapters on a dolly, giving themselves enough reserve capacity to accommodate the steady increase in rotor blade length and weight that the industry is experiencing. With a deadweight of approximately 7.0 to 7.3 tons (depending on the choice of equipment) and a maximum fifth-wheel load of 30 tons, the dolly has a remaining load capacity of around 23 tons. Working at the other end of the system, the four-axle vario self-steering trailers boast a load capacity of around 32 tons with a total technical weight of 40 tons. Quite simply, these trailer combinations make it easy to plan for an extensive range of rotor blade sizes – even those approaching the 100-meter mark. 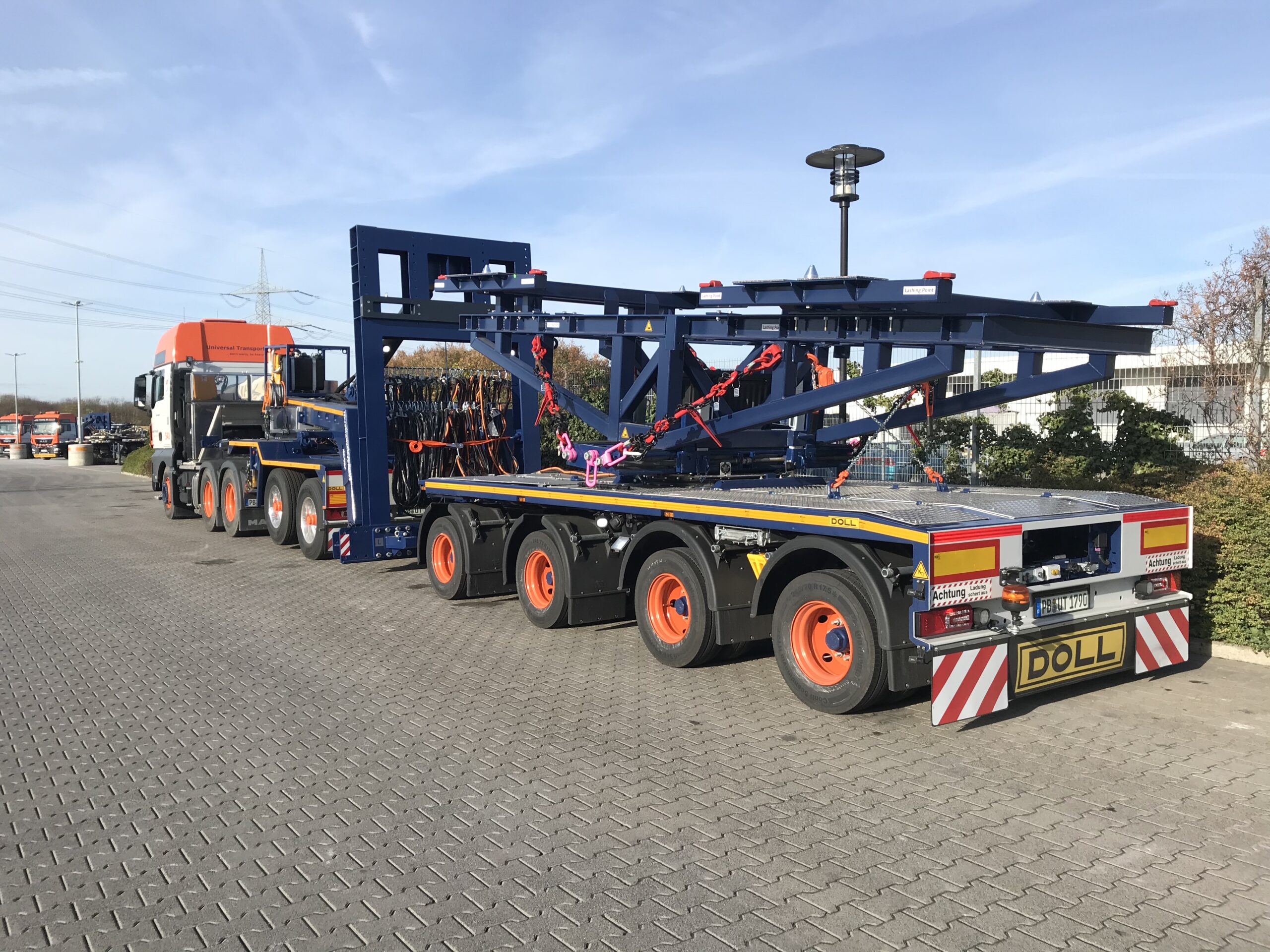 Based in the Netherlands, Bolk Transport put no fewer than three of these systems into operation a few weeks ago.

“Wind turbines have three blades, but it’s not like you transport one to its destination, then go back for the other two”, he adds with a touch of dry humour. “So you need three vehicles – one for each blade.”

Previously, Bolk had relied solely on telescopic trailers to transport wind power components. As rotor blades began growing to more than 65 metres in length, however, it knew it had to find an alternative solution.

“We’re now increasingly seeing blades approaching 75 metres long – and they’re getting heavier too”, says Savenije. “We found that Doll’s self-steering trailer combinations offered the best solution for what we needed and were great value for money.” 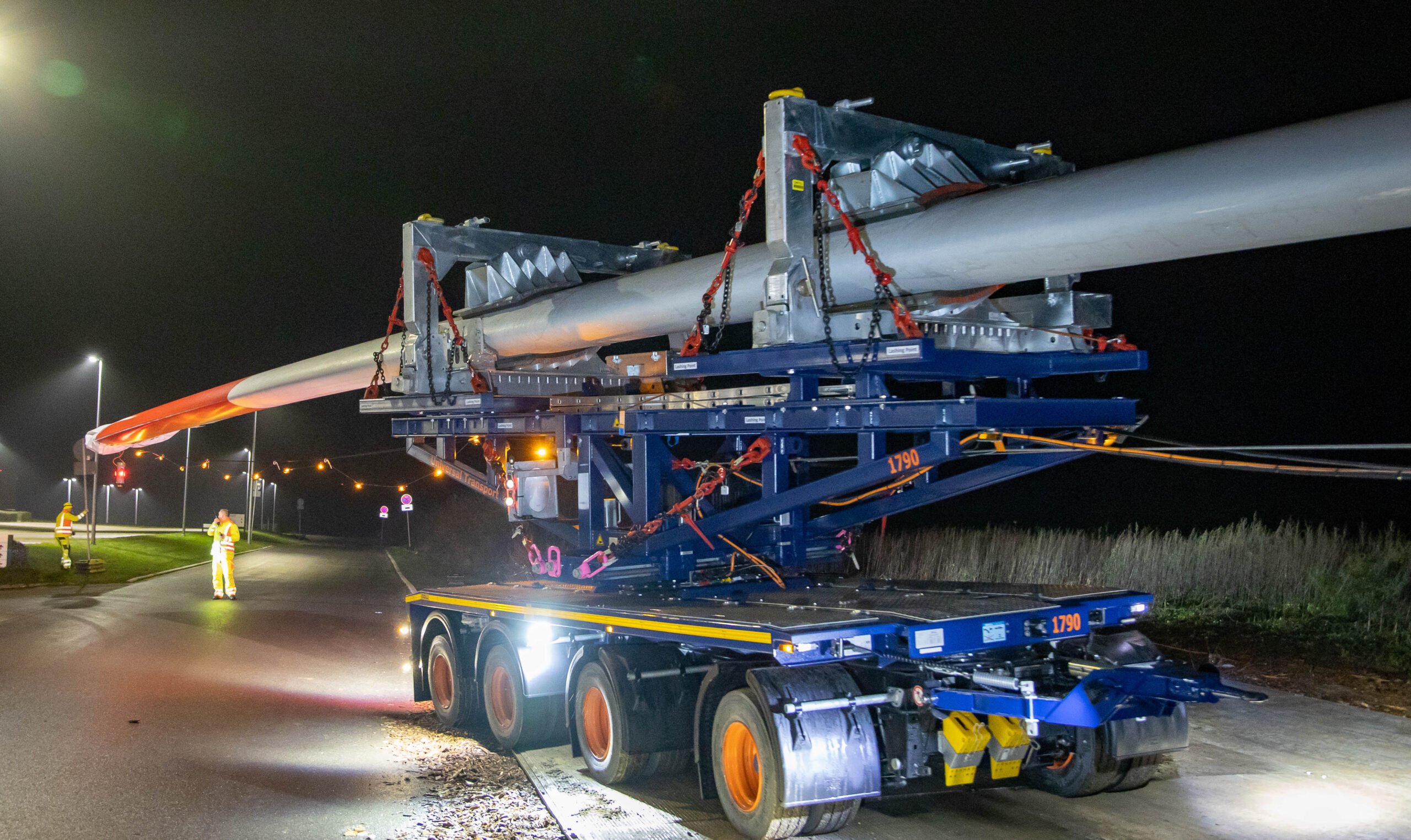 In mid-January, the Seaport of Brake in Germany provided the location for the first trial loading operation, with Bolk project manager Emil Leushuis carefully monitoring progress and taking notes.

“What makes the trailer technology so good is that the rotor blade is self-supporting and there are much more flexible options for navigating obstacles. There’s also a tiltable lifting adapter at the front, and the equipment is able to get round bends much more smoothly. The extensive slewing angle and attached turntable make it possible to position the dolly and self-steering trailer at an almost entirely transverse angle to the bolster, while the vehicle keeps on going”. 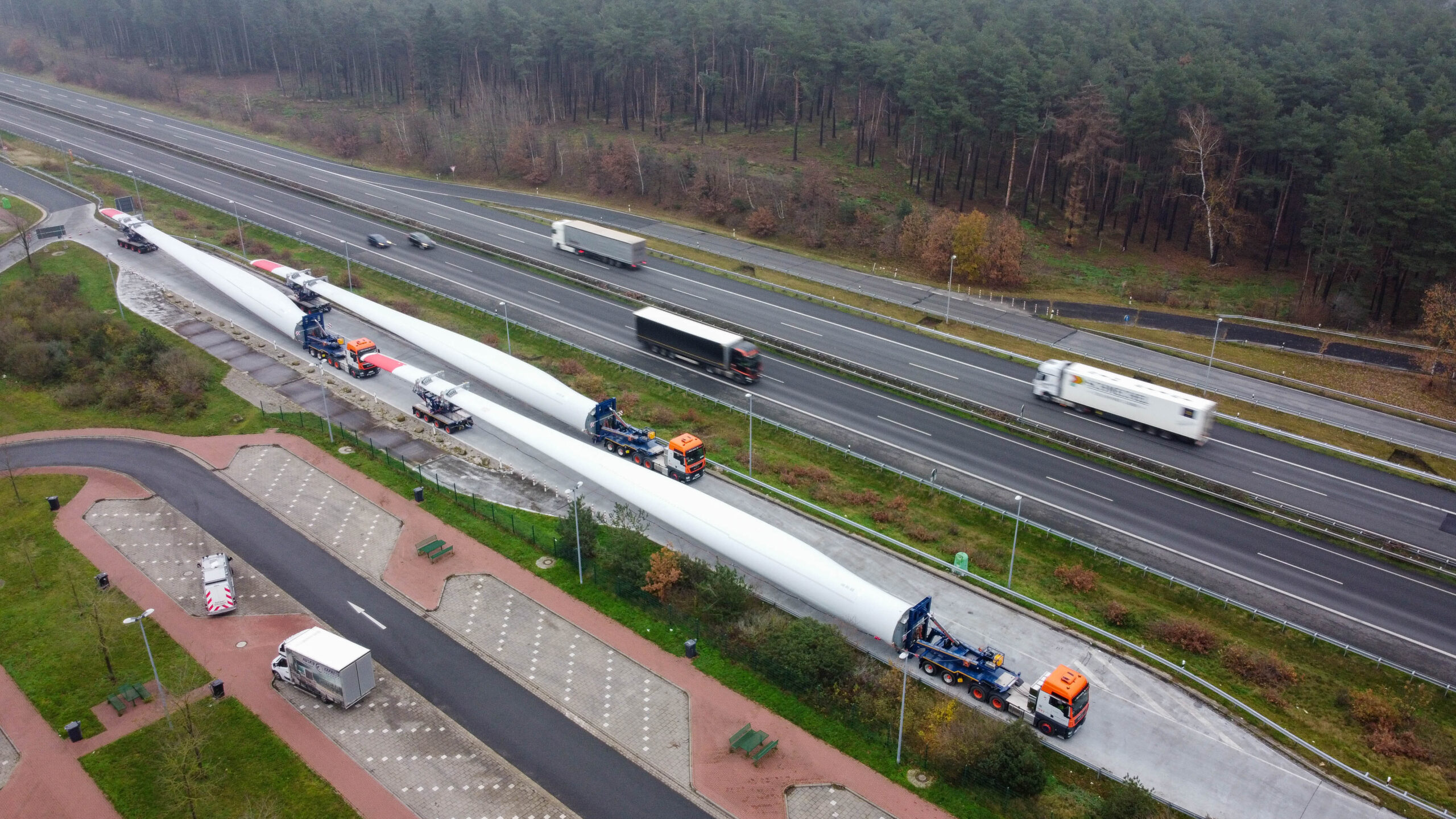 The specialists at Universal Transport in Paderborn, Germany have been making use of their three latest Doll self-steering trailer combinations since August 2020. Driver Ronny Knoblauch can attest to the benefits that the system brings in practice:

“We’re currently using the trailers to carry rotor blades measuring as much as 65 metres long, on vehicles with a total length of up to 77 metres. The extendable cable and rope systems provide 120 metres in length, so there’s practically no limit to how far you can take the system – which isn’t the case with telescopic trailers”. 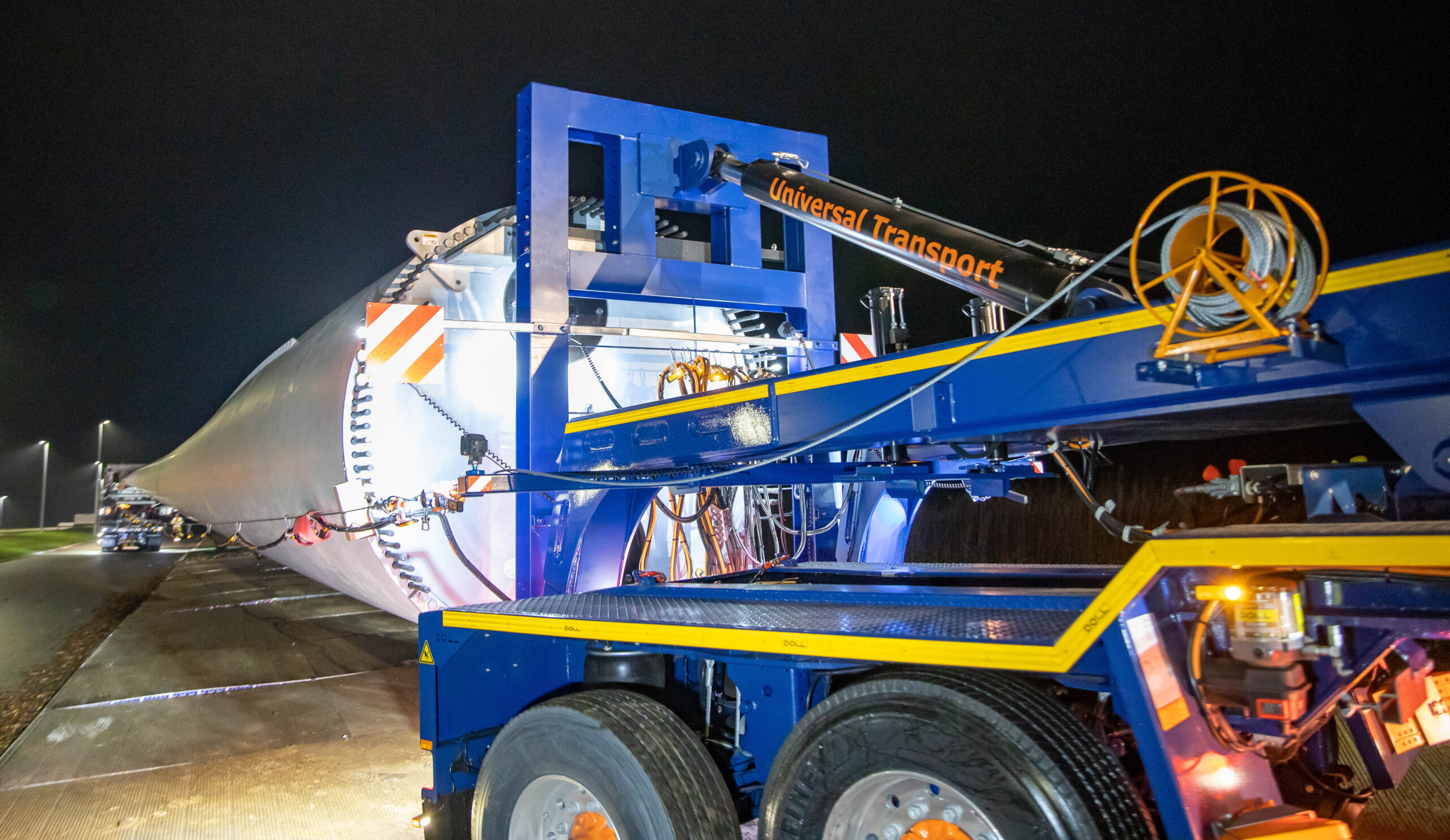 He cites yet more advantages to using the DOLL system as opposed to telescopic trailers or extendable semi low-loaders:

“As there’s no telescopic beam, you’re left with much more room to cross over obstacles underneath the load. That means we don’t have to move nearly as many crash barriers aside when we encounter them on our outward and return journeys. The system is also a lot more agile. I can navigate roundabouts relatively easily with the traction unit and dolly, for instance, and the self-steering trailer simply follows me round. The turntable on the trailer gives you a huge slewing range at the rear, so you can keep driving straight at the front for a long time. The nature of the system means it’s even more important to have a second person involved so that they can give you feedback and intervene in the steering at any time – but on the whole, the handling is much smoother than it is in a telescopic trailer. And the system’s actually fun to drive”.

The hydraulic lifting adapter on the dolly also has a vital role to play: “I can release it by as much as 80 centimetres, which is handy in situations like manoeuvring over a traffic island or crouching down to road level to get under a low sign gantry”.

Holger Dechant, managing director of Universal Transport, backs this up: “The new combinations have consistently shown us how reliable they are. Rotor blades are getting longer all the time, and we have to respond to that”.

He openly breaches a subject that has had an impact on the entire sector of transport involved in wind energy:

“The goalposts in the wind energy industry are moving all the time – partly as a result of policy and partly because of equipment manufacturers. That means the volumes of transport to do with the industry are always changing and we’re constantly having to rise to new challenges to do with equipment dimensions – that affects rotor blades most of all, but it also affects towers and nacelles, of course. Conventional telescopic trailers just aren’t cutting it anymore. The equipment is getting more and more specialised, and it’s no secret to say that it’s becoming more expensive too”. 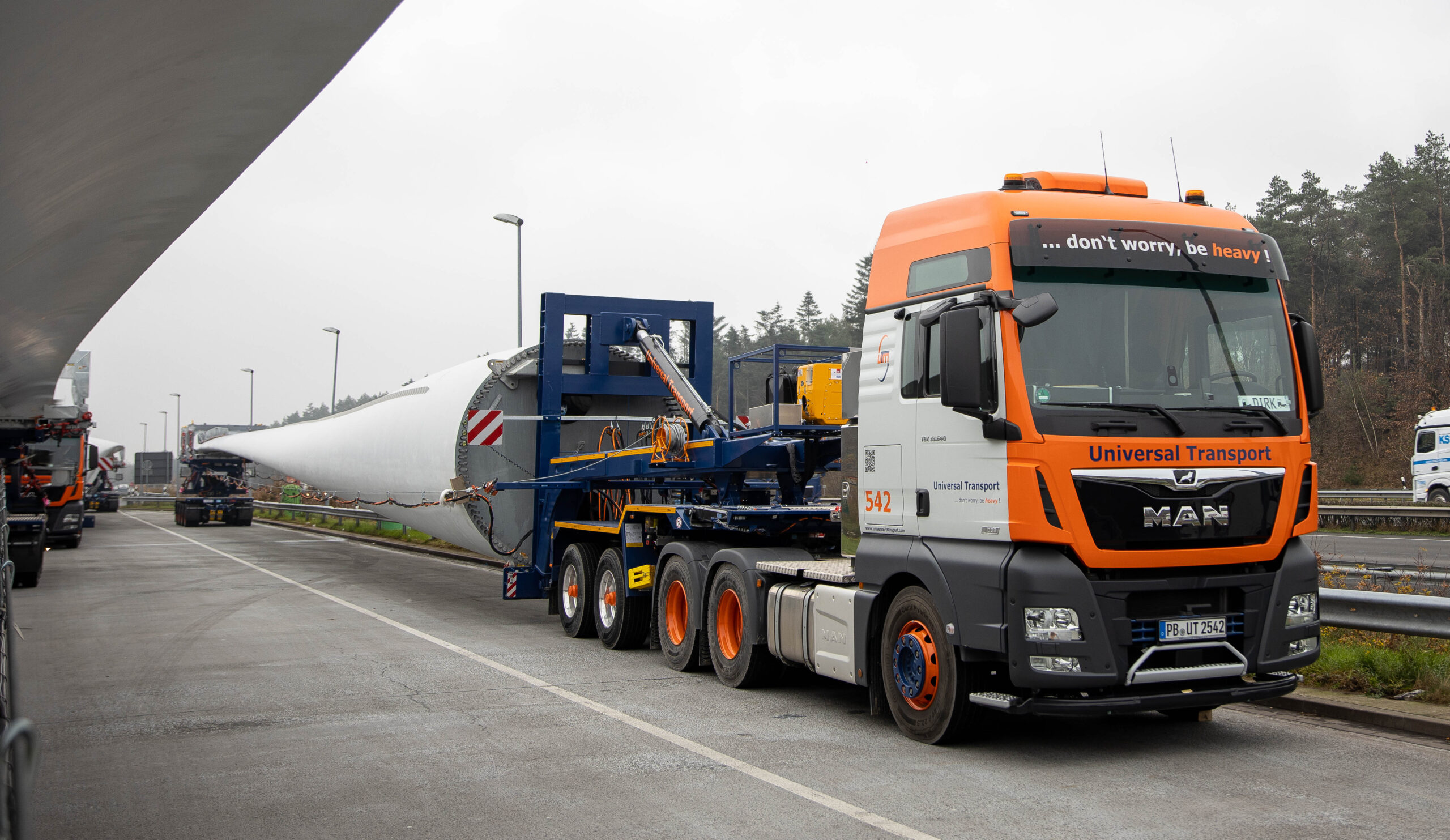 To ensure investments pay off in the face of a fluctuating market, equipment needs to demonstrate a high degree of flexibility alongside its specialist features. “We combine the trailers with different dollies to transport other long materials such as concrete parts and bridge girders. If rotor blades do get to the 100-metre level, we’ll have what it takes to cope with that.”

Body: Ball bearing turntable mounted with breaker for attaching the special DOLL bolster; up to 48 t load, max. bolster angle 85° to the left and right

Body: Intermediate frame with root frame attachment; Mounting of a lifting cylinder that for lifting and lowering the wind blade, maximum lift above the ground: approximately 800 mm