Engcon, the world-leading tiltrotator manufacturer, has for the third year in a row received the award Sweden’s Best Managed Companies, presented by Deloitte in collaboration with Nasdaq. 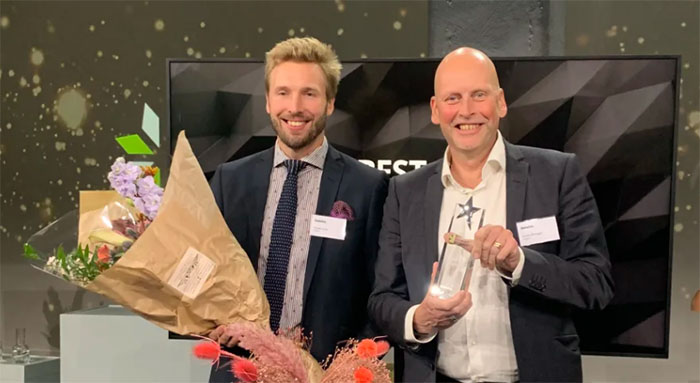 “This is a proof that we run the company in a serious and long-term way. It is with pride that we receive this award”,

For the third year in a row, Engcon received the award as one of Sweden’s Best Managed Companies 2021.

“This is a nice recognition that we run the company in a serious and long-term way and each time we are praised for our business, I become increasingly proud of what we do”,

says Engcon’s CEO Krister Blomgren who together with Engcon’s Area Sales Manager, Anders Smith, received the award which was presented at the Fotografiska (photographic museum) in Stockholm, Sweden.

Krister also takes the opportunity to thank his partners and customers.

“In addition to a serious and long-term business, we have always had our partners and customers at the centre of what we do and together with them we will continue to change the digging world, with our tiltrotator and other smart products”,

Therese Kjellberg, partner at Deloitte and responsible for Sweden’s Best Managed Companies, is impressed by the winners and their successes.

“We are so proud to present the award to our Best Managed Companies for the third year. Over the past year, we have seen that these companies have had a clear strategy and execution ability where a strong corporate culture is combined with a long-term focus on innovation, employees and customers, which has made them cope well throughout the pandemic”,

Nasdaq comments on the selected companies:

“Every year it is just as fascinating to see which successful and well-run companies we have in Sweden. Despite the pandemic and the limitations, it has entailed, this year’s starting field of companies in Sweden’s Best Managed Companies has managed to demonstrate its exceptional commitment and good leadership to create profitable growth. They have not only created strong teams but also ensured skills development for the future, which is a key to long-term success. So, it is with great honour and good hope to see them in the starting field next year as well that we congratulate them on the award”,

About Best Managed Companies: Founded by Deloitte in Canada in 1993 and has since then been established in over 20 countries around the world. Sweden’s Best Managed Companies was launched in 2018 and in 2019 the award was presented for the first time in Sweden. The purpose is to highlight well-run private Swedish companies that form an important part of the Swedish business community.

This year’s jury consists of Jenny Rosberg, CEO at ROPA Management, entrepreneur and board professional, Kim Persson, serial entrepreneur, founder and CEO at Sjö & Hav Outdoor Care and Håkan Sjögren, Managing Director and responsible for listings on Nasdaq in Stockholm.

Kobelco Has Been Honored at the World Demolition Summit in Vienna