Aquajet, a global leader in the design and manufacturing of innovative Hydrodemolition technology, introduces its newest Hydrodemolition robot — the Aqua Cutter 750V. The new model launches Aquajet’s revolutionary patented Infinity oscillation that moves the water jet in an infinity – or figure 8 – pattern, removing more concrete in a single pass while reducing shadowing, eliminating the risk of pipe holes and providing an ideal bonding surface. 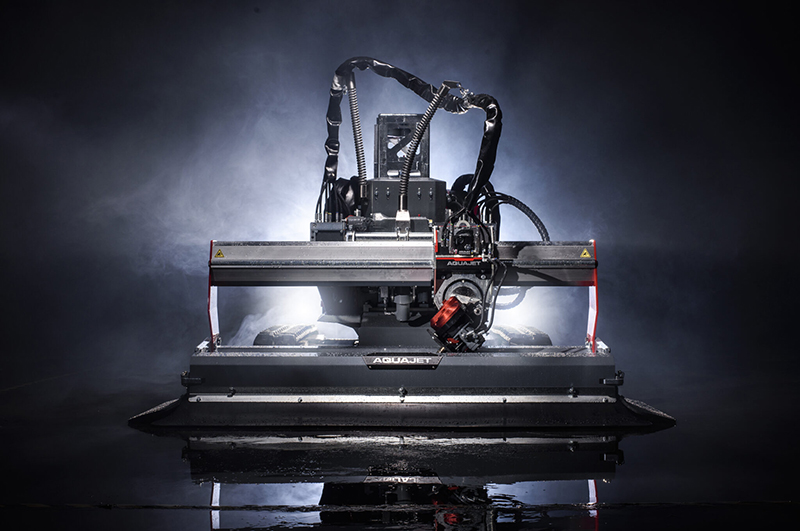 The 750V also features the next generation Evolution 3.0 Control System that includes new functions, including the ability to automatically calculate optimal settings for lance motion for greater precision and efficiency. Like all Aqua Cutter Robots, the 750V cleans and descales rebar without causing microfracturing. It also maintains exceptional horizontal, vertical and overhead reach, making it suitable for a wide variety of concrete removal tasks, such as renovation and bridge and road repair.

“Aquajet has always been at the forefront of Hydrodemolition innovation. Infinity oscillation is the next technological evolution, and it is changing how Hydrodemolition contractors think about productivity. In the coming years, we will see it replacing rotating lances and similar tools to become the new industry standard. With the productivity gains realized during customer testing, the Aqua Cutter 750V is a significant advancement for Hydrodemolition.” 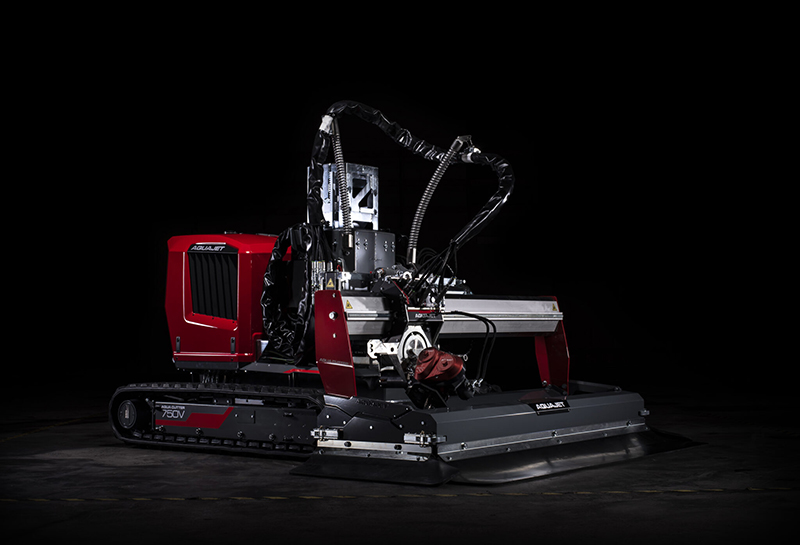 The new machine offers constant lance motion in an infinity – or figure 8 – pattern, rather than the standard wave pattern that has natural fluctuations in speed. The continuous movement of the infinity pattern allows the 750V to remove more material in a single pass, significantly reducing shadowing and making it unnecessary to follow-up with hand lancing. The consistent motion also increases the digging effect and virtually eliminates pipe holes, resulting in a superior bonding surface and increased productivity. Another benefit is the constant, low noise that is less disruptive in urban areas and other noise-sensitive environments.

“Do you know what this level of performance means? It’s the biggest revolution in the history of Hydrodemolition.”

asked Alessandro Campa, managing director of Atümat, Aquajet’s distributor in Switzerland, when he saw the 750V operate for the first time.

The Aqua Cutter 750V shares several similarities with Aquajet’s innovative Ergo System. The infinity power head has Ergo-style spring-tensioned rollers and quick connection to the roller beam. It also uses absolute sensors, which means it automatically adjusts at the touch of a button. With a larger roller width and a new triangulated base frame for improved stability, the infinity power head contributes to precision while improving the Hydrodemolition result.

As part of the revolutionary design, the Aqua Cutter 750V also includes an upgraded version of the Evolution Control System. First released in 2004, this innovative control system still features Aquajet’s patented Equal Distance System (EDS) as well as the ability to cut shapes and remove concrete at different depths in the same pass. The new version ratchets up its performance even more with an oscillation menu that automatically calculates optimal settings for the operator. This not only maximizes production from the machine, but also prevents miscalculations from manual adjustments.

Another key feature is remote start and stop of the diesel engine through radio remotecontrol, making it possible for the operator to stop or start the robot from a safe distance and eliminating the need for the machine to run all day. In addition, the machine will automatically shut down if there’s no activity for a certain amount of time, saving battery power. 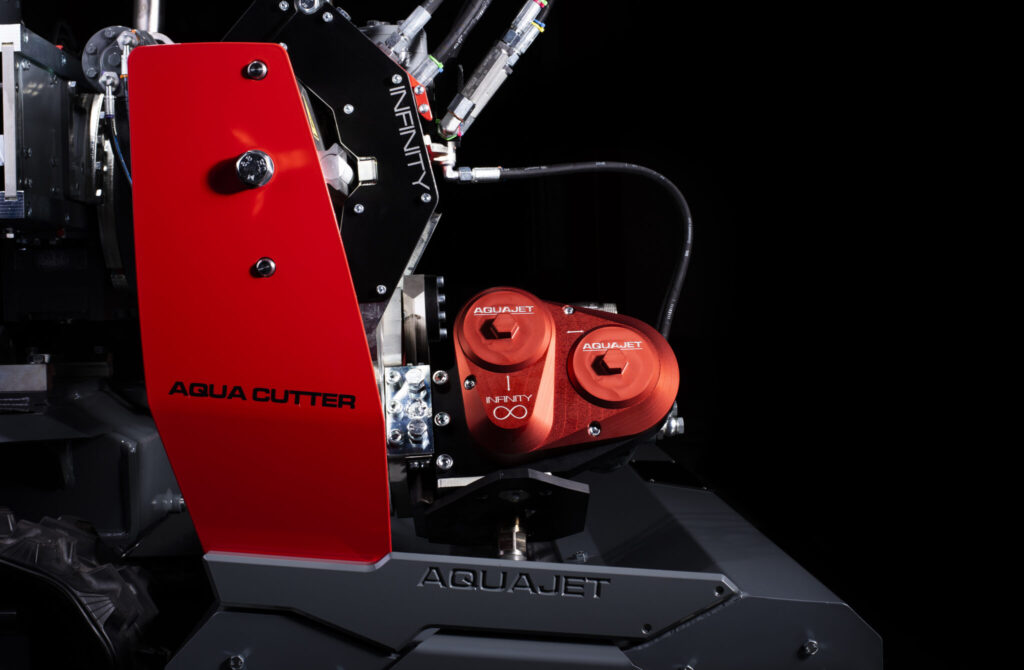 The engine control on the 750V offers increased power thanks to the automatic speed-controlled throttle that automatically adapts RPMs to the load. This improves sustainability with lower fuel consumption and emissions.

The Evolution 3.0 Control System uses a visual status light to show the state of the machine with different colors. This allows operators to easily see when the machine is working correctly, when it needs attention and when automatic functions or the engine have stopped.

The 750V also offers a new level of performance with Aquajet’s precision drive. This technology provides highly accurate hydraulic movements, eliminating the inconsistencies that compromise the result. In automatic mode, the robot’s lance is highly controlled and always keeps the water jet in the ideal position, which is key to achieving a perfect Hydrodemolition result. 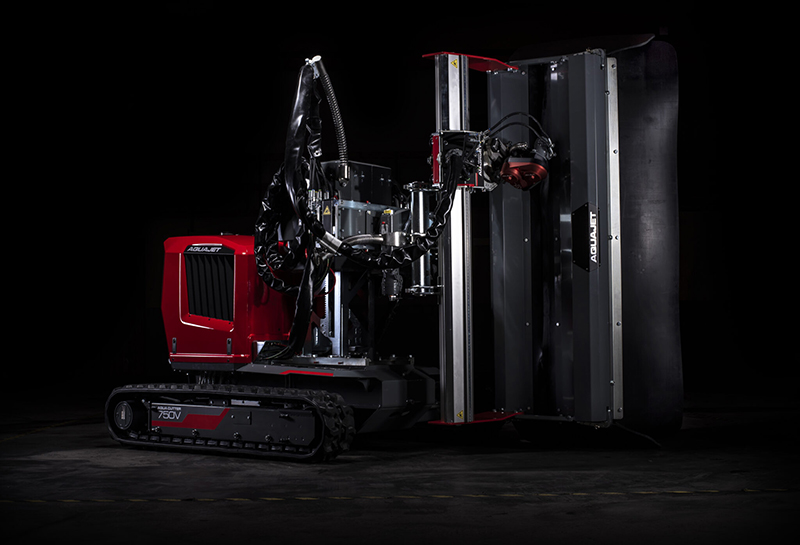 With an all-new tracked system, the 750V is smooth-driving, similar to a car. The smooth motion increases service life by eliminating bounces that can compromise components and improves the accuracy of nozzle distance to surface, further improving precision.

The 750V is compatible with Aquajet’s line of accessories, including the rotolance, circular power head and Aqua spine. It is also compatible with Aquajet’s Ecosilence high-pressure pump that supplies the water to run the machine and provides a cost-effective option for transport and storage. The 20-foot purpose-built, state-of-the-art insulated container includes the pump, large capacity diesel engine and control system, with a convenient storage area for the robot and accessories. Finally, Aquajet’s EcoClear is a fully automated system that allows contractors to treat water on-site and release it or recirculate it in the robot.