Actually, a crawler crane with a 400-tonne lifting capacity should have been used to unload the massive transformer at the port of Bamberg due to the constricted space available there. The 150-tonne load would have had to be hoisted out of the hold of a barge using a derrick boom and suspended ballast. Quite a challenge, when you consider the equipment, transport, and set-up time required for the job. However, using a clever concept, two Liebherr LTM 1450-8.1 mobile cranes from BKL Baukran Logistik GmbH managed to complete the job on tricky terrain without any problem. 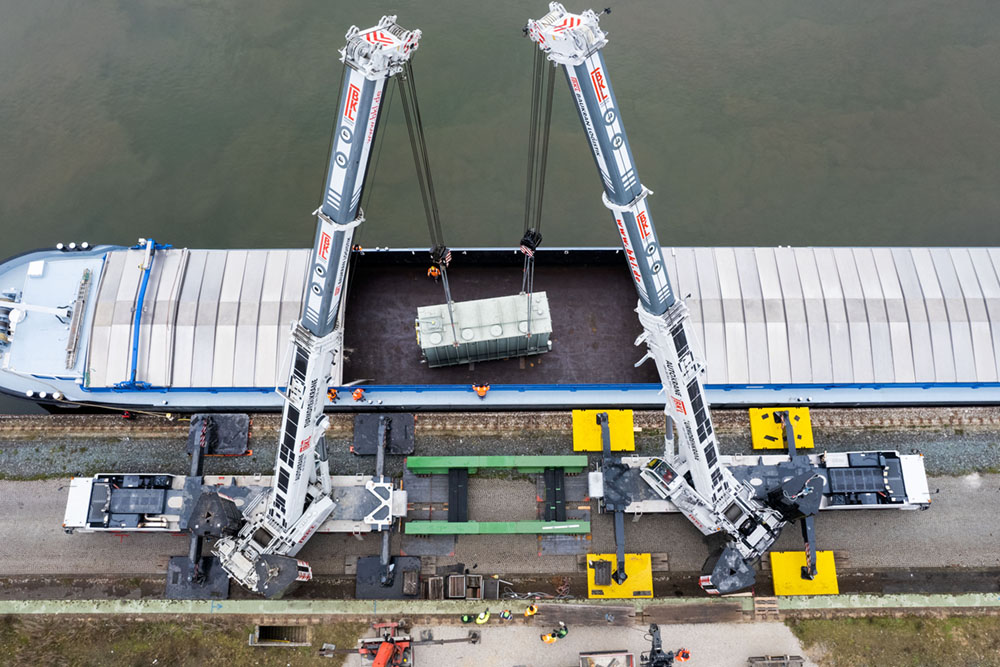 The structural topography of the Bamberg port basin is not exactly ideal for crane work. It features a narrow strip for vehicles directly next to the quay wall. However, this is only around ten meters wide and is directly next to a concrete wall of around three meters in height, which supports the higher plateau behind it with the actual crane positioning area and also limits the space available for cranes due to its having a large overhang at the top. Rainer Speich, Manager of the BKL site in Ingolstadt, working with other crane experts, managed to complete the job, which conventional wisdom says should have been carried out by a crawler crane, and all the increased costs that involves, using two LTM 1450-8.1 mobile cranes.

The sophisticated concept was created by the crane experts whilst the crane equipment required to achieve it was supplied by the two Liebherr mobile cranes. In addition to the VarioBase® variable supporting base, for which the outrigger cylinders on the crane can be positioned individually, the VarioBallast® ballasting system, whose distance to the slewing ring can also be adjusted, was the main feature that enabled this challenge involving centimeter precision to be completed successfully.

Set up back to back, with their outriggers in place right up to the edge of the water and the bordering wall and also slightly offset due to the load’s decentralized center of gravity, the ten-meter-long base girders of the lifting lever bridge are used as a transport device were first placed between the crane vehicles. With 104 tonnes of ballast on each slewing platform, the two Liebherr cranes hoisted the enormous 2/5 transformer out of the barge. To do so, one of the mobile cranes had to lift 68 tonnes with a radius of 15.7 meters, whilst the other had a radius of 12.5 meters with a net hoisting weight of 81 tonnes on the hook. There was very little space between the ballast stacks and the bordering support wall behind the two modern cranes. 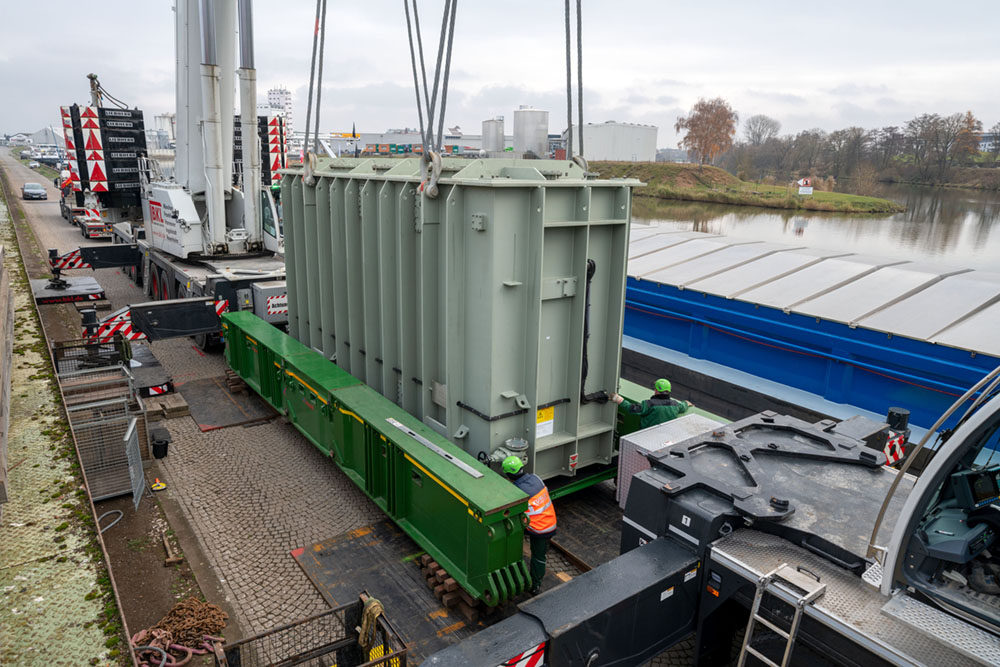 The exciting, precisely planned tandem hoist by the two Liebherr Replace Crawler Cranes With Two Ltm 1450- 8.1 Mobile Cranes also attracted a host of onlookers. Representatives of “Bayernhafen Bamberg GmbH” were just as determined to watch the crane job as interested personnel from other crane service providers.

“There is no crane other than the LTM 1450-8.1, which would be able to complete this tandem hoist at this location. Moreover, handling the load with the mobile cranes is significantly less expensive than using a crawler crane, of course, and actually works out at around onethird of the cost.”

After working with the LTM 1450-8.1 for decades, experienced Site Manager Rainer Speich from BKL in Ingolstadt clearly shows what a big fan he is of the crane. In mid-March, he took delivery of another of these machines on behalf of BKL in person at the Liebherr plant in Ehingen. BKL Baukran Logistik GmbH is a major service provider of full crane work, crane rental, and transport and in addition to its head office in Forstinning near Munich, it has five other sites spread throughout Germany.