The VC 2000 drum cutter from Epiroc takes demolition and digging to the next level. Thanks to the arrangement of its cutting heads in a “V” formation, it achieves pioneering performance such as higher efficiency and cost-effectiveness, as well as protection of operators, the environment and carriers. It mastered its work during the removal of rock for a retention basin by the A45 near Siegen-Süd with flying colours, impressing both of the main partners – Straßen- und Tiefbau Kirchhundem and Epiroc authorised dealer maschinen + technik Sauerland – with its impressive functionality and user-friendliness. 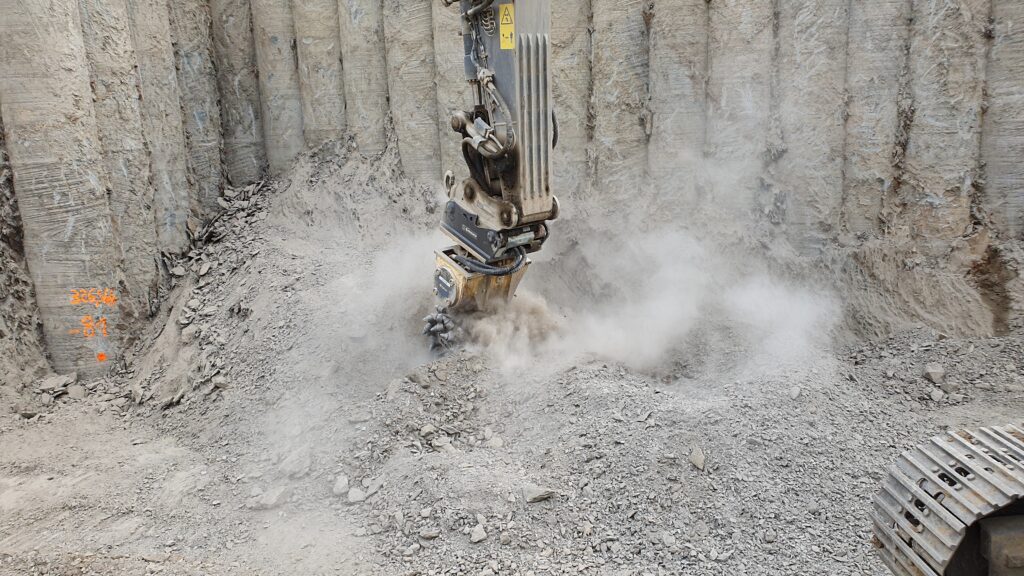 Removing rock for the rainwater retention basin at the summit of the A45 motorway in mountainous Siegen was a sensitive task. The building authorities specified that the slope needed to be secured by a retaining wall. There was rock material on the front of this surface that had to be removed with a high degree of precision and finesse to ensure that the wall, built from concrete piles, was not damaged. A drum cutter was needed that could cope with the hardness of the rock and work reliably in the confined space. The VC 2000 from Epiroc had been tested on various 20-40 tonne excavators beforehand, but mainly on a Volvo 30 tonne tracked excavator, and met the complex requirements perfectly: It ensured that removal was quick and effortless, and that the construction work could be completed successfully within around two weeks.

The customer was delighted with the effective and above all efficient construction process and was impressed by the performance of the low-vibration and low-maintenance drum cutter. As the organisation responsible for the construction project, the established company from Kirchhundem brought expertise and an understanding of the latest technologies to the project. An additional factor was the local nature and environment that needed to be protected. Prior to use, the modern drum cutter was quickly re-oiled with the fully compatible “Panolin” bio-hydraulic oil, which is biodegradable and does not pollute soil or rock. In general, the company from Sauerland operates its fleet of excavators and attachments with a fully hydraulic Oilquick quick-coupling system and with Panolin bio-hydraulic oil. 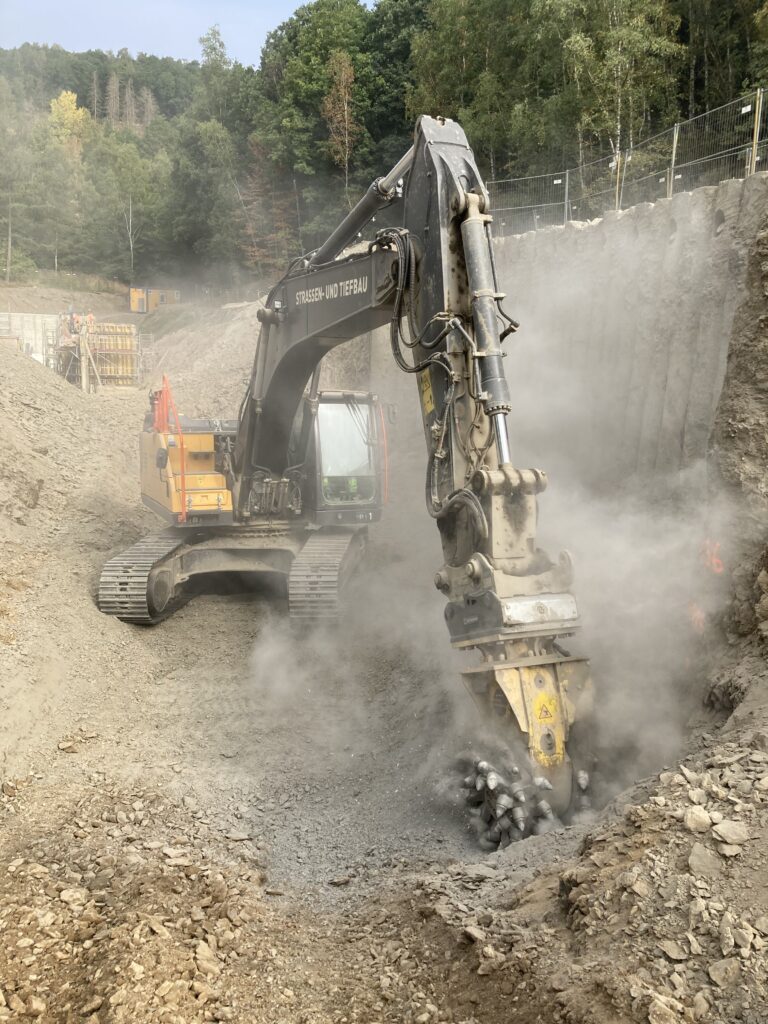 Simple change with great impact – this sums up the development of the VC 2000 concisely and succinctly. Its immediately recognisable special feature, the V-shape, has it all: It combines simplicity with exceptional leverage and outstanding performance. It all starts with the fact that using the new drum cutter saves time and money and reduces energy use by up to 40 percent. Because of its special design, it allows flat surfaces to be created without material accumulating between the drums as is usually the case. In other words, the material is completely removed in the middle of the drum cutter due to the inclined cutting heads – thanks to the patent-pending technology – without the need for swivelling. This removes the need for the zigzag course and digging can take place faster and much more accurately than before. The VC 2000 can simply be moved straight ahead like a shovel or trench bucket on conventional equipment, making it more efficient and easier to get from A to B.

Of course, the drum cutter can still be used as a swivelling cutter for removing surface material like a conventional transverse drum cutter. A further advantage of the V-technology becomes apparent during regular digging for supply lines, for example: In this case, the drum cutter can simply work like a trench bucket facing the excavator, producing deep, vertical trenches in rock and concrete. Incidentally, this new product also works underwater and can be used up to a depth of 30 metres without additional installation or modification. 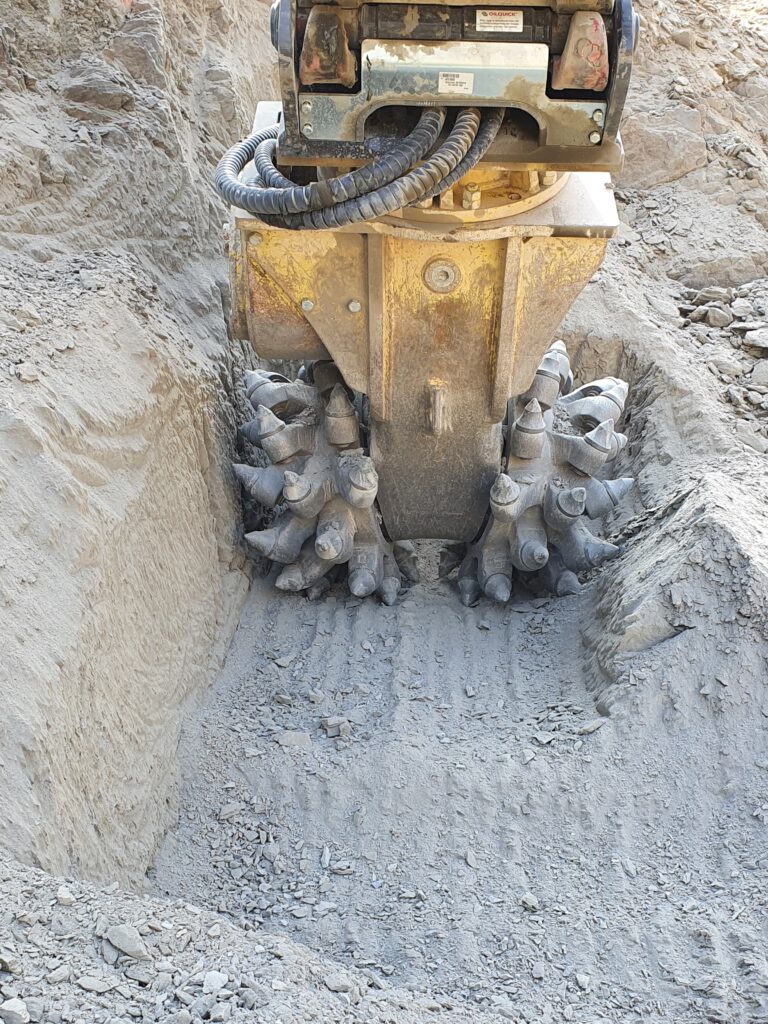 The innovative VC 2000 is ideal for profiling hard surfaces such as rock or concrete walls in particular, but also for excavating frozen soil, soft rock in quarries and general demolition work. In addition to its robust housing design for increased operating time and a durable drive shaft bearing with maintenance-free mechanical seal system, it also surprises with an adaptable gear motor with high torque for greater productivity and longer motor service life. Extremely stable gears for optimal power transmission also ensure complete reliability – as you would expect from Epiroc equipment. The new drum cutter also offers intuitive user-friendliness and protection of the carrier. This, in turn, leads to reduced downtime and maintenance, making the VC 2000 a worthwhile long-term investment.

The VC 2000 is launched together with the sturdy Pro Bracket console, which is particularly advantageous during digging and with fully hydraulic changers. The hydraulic hoses were routed into the adapter plate at the rear in the centre of the drum cutter extension arm so that they are effectively protected against the ingress of material and dust and are subjected to less mechanical stress.