An Iowa contractor framing a new building is finding that using a Potain self-erecting tower crane on the job can help the company complete the project up to 50% faster than previously possible.

Fager Framing Inc. (Fager), based in Cedar Falls, has deployed a Potain Igo T 85 A to erect the structure of a large building and has realized the crane is not only driving greater productivity, but it has also simplified onsite operations as it replaced more conventional construction equipment such as telehandlers and mobile cranes. The Potain crane radio remote control operation is another advantage as it allows workers to navigate the construction site on foot and see exactly where loads are being placed.

“As the operations manager, I can say that without the crane we’d be going at least a third of the time slower, if not half the time,” said Ben Mather, project manager at Fager.

“With the crane at the site we can literally cut our production times in half because of the functionalities of it. You can use the one crane versus four or five different pieces of machinery.”

From a small 14.8 sq ft cross-base footprint, the Potain Igo T 85 A boasts extensive reach and ample capacity to access the entire jobsite. The ease of operation allows the operator to perform lifts and place prefabricated materials — such as floor joists, wall sections and roof trusses — directly where they are needed, accelerating the overall construction process.

“A lot of times you have to lift something up and then wait a couple of hours and then lift something else up. So, something like that would be really hard with a truck crane,” said Justin Scheff, framing crew leader at Fager.

“It’s nice because you can be up where you’re hoisting the material to. A lot of times with truck cranes or cabs, sometimes you lose visual sight of where you’re going, where with the remote you can walk around and see exactly where your load’s at.”

Many advantages, one piece of equipment

By moving around the jobsite, the operator’s communication with other crew members is improved, resulting in a more organized team overall. Cooperation with subcontractors is also facilitated. Additionally, Fager operators have been able to make lifts across the entire jobsite from a single location without needing to move the crane.

Another significant advantage for Fager is that the crane has allowed the company to plan the building process better due to the crane’s reliability and readiness to operate at all times.

“It’s been great from start to finish. You have the crane on site eight hours a day and you know it’s going to be there,” said Jeremy Fager, president at the company.

“The way you plan your build is a lot more efficient. Because you know what you’re going to get every day. And you have a piece of equipment that will reach every inch of the building. So that’s the big benefit.” 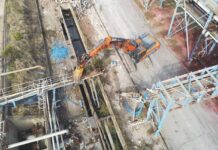 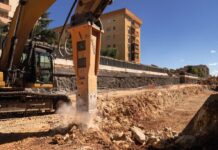 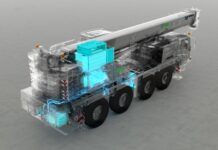 Tadano To Present Demo All Terrain Hybrid Crane at bauma 2022 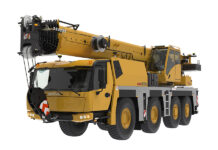 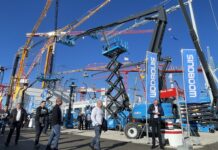 Sinoboom Focuses on Electromobility with Full Electric Range at bauma 2022 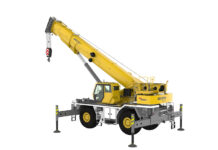 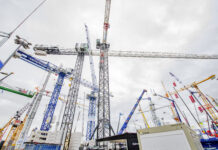