Since recent information about the mega project for self-stressing bridge girders for the Transilvanian highway between Nadaselu and Zimbor in Romania, the company UMB has consolidated in the public works sector. The company is now diversifying towards the area of industrial buildings for which it has contracted a variety of moulds with Moldtech including equipment for the production of pre-stressed L T and Delta beams. 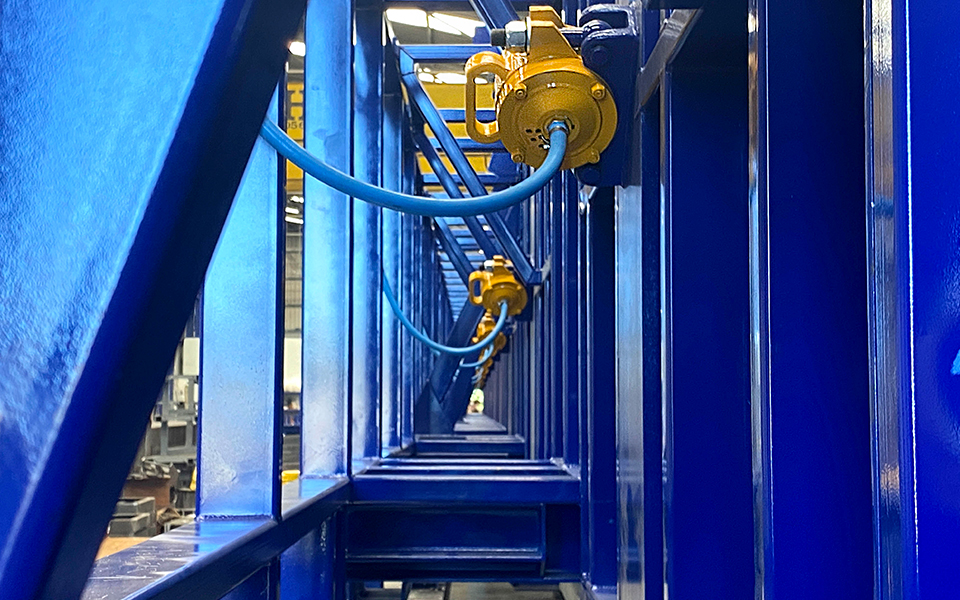 One of the moulds recently delivered was a double column mould with a total length of 34 meters. In order to provide for more efficient and comfortable work operations the mould is equipped with a hydraulic system allowing to activate its opening and closing from an electric control panel. 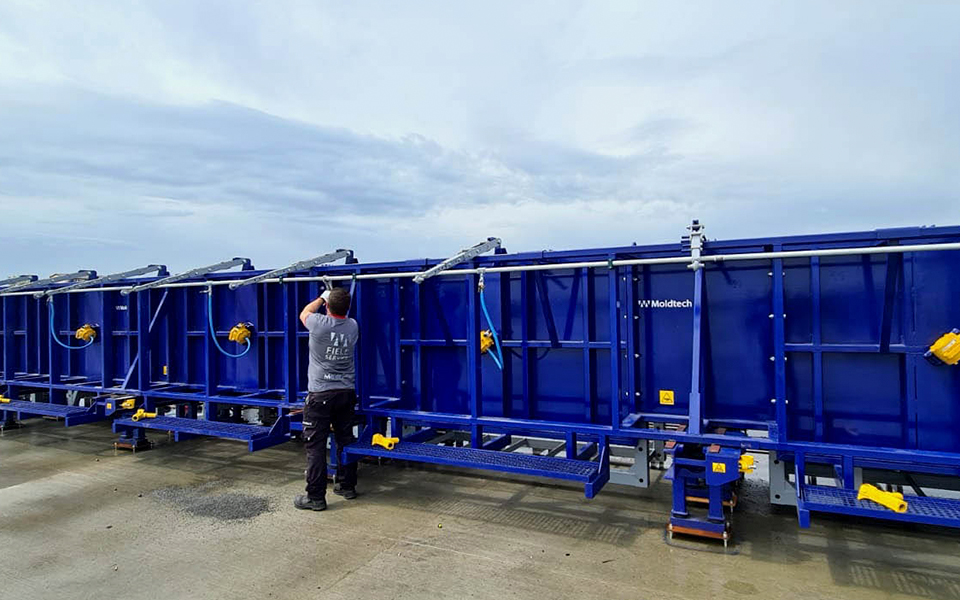 The movements are carried out very smoothly thanks to nylon sliding paths located at the basis of mould. Once the closing movement has been completed there are mechanical locks to tighten the mould sides against the base plate before the pouring of the concrete can take place. This tightening, in combination with robust mould sides and the top ties guarantees an absolute straightness of the casted element. 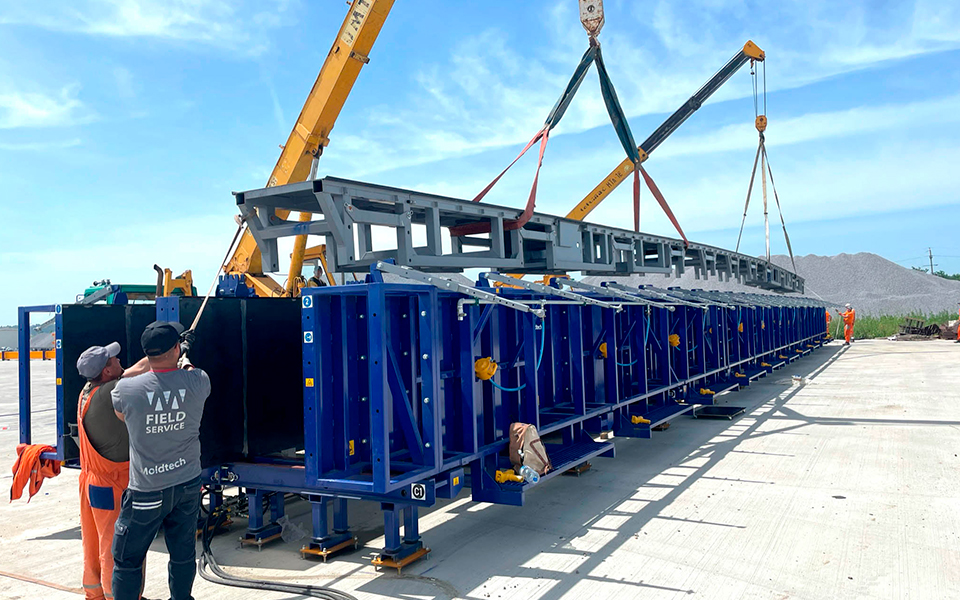 Each line of the mould can produce a variety of column widths ranging from 30cm to 120cm, This allows UMB to cast columns in a full range from 30cm  x 30cm up to 120cm x 120 cm. Furthermore, the mould allows to incorporate corbels on 3 sides of the column. Columns with the typical length of 14 meters would have 3 sets of corbels at different heights of the column. 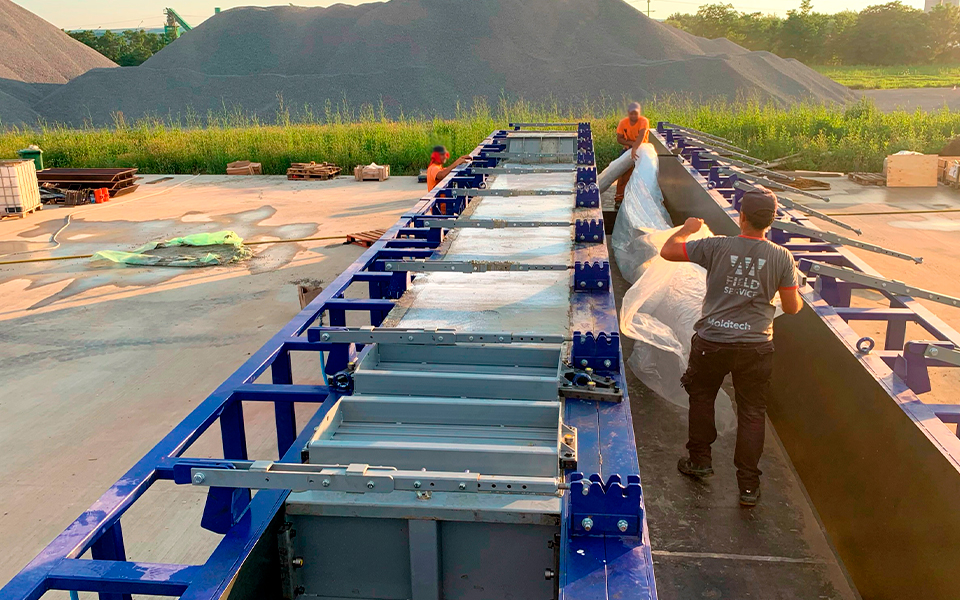 The mould offers flexibility for the positioning of the corbel height within a certain range thanks to movable plates on the side and on the base of the mould. For optimum compaction of the concrete the mould incorporates a pneumatic vibration system which is connected to a compressor and allows to vibrate the different mould sections. Lastly the mould complies with all European safety legislation with regards to signage, alarms and other preventive measures. 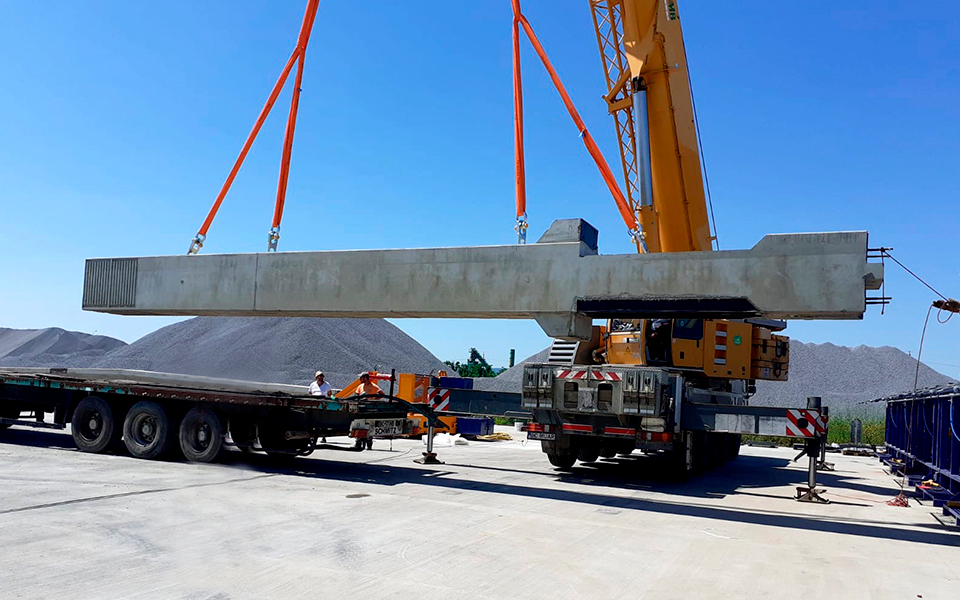 This new mould, together with other Moldtech equipment for the production of panels and beams, will allow UMB to offer an integrated precast solution for the construction of industrial and logistic buildings, a growing market segment in the Romanian construction business.